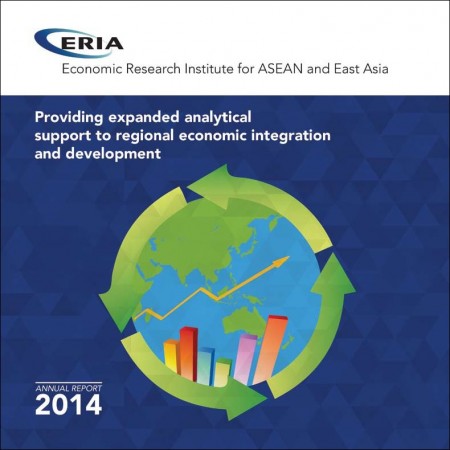 As regional integration in ASEAN and East Asia gains momentum and the establishment of the ASEAN Economic Community (AEC) sees fruition in 2015, fiscal year (FY) 2014 proved to be a very energetic and meaningful year for the Economic Research Institute for ASEAN and East Asia (ERIA).

ERIA has been formally mandated by regional leaders to provide support to the Chair of the ASEAN Summit and the East Asia Summit. Towards this end, we have been giving our best efforts to fulfil this mandate and support the past chairs; we likewise contributed to Myanmar’s chairmanship of ASEAN in 2014 by continuing to conduct research, provide policy recommendations, and organise symposia and workshops, among others.

FY2014 brought forth many milestones for ERIA. Foremost is the signing of a memorandum of understanding (MoU) with the Organisation for Economic Co-operation and Development (OECD) in May 2014, which signalled the broadening of ERIA’s work and collaboration with other international organisations. ERIA signed this MoU with OECD in Paris to conduct joint policy research on multi-dimensional issues. Said event is the culmination of ERIA’s role as the ‘East Asia version of the OECD’, envisioned as early as August 2006 when Japan proposed a think tank for the ASEAN and East Asia region. Since then, we have deepened our collaboration with OECD in conducting joint workshops, fora, and research projects, among others.

Recognising that constant meeting and interaction with member countries keep our work in line with their expectations, as well as those of the region as a whole, ERIA held a dialogue with the United States, the Russian Federation, and Mongolia in May and June for the first time. This represents the enlargement of the cooperation process. I hope these dialogues will help seek newer and expanded channels of cooperation in research and related activities.

ERIA is also strengthening its presence in energy activities. In September, ERIA signed an MoU with the Energy Research Institute Network. I am confident that this MoU will help us broaden and improve the quality of the energy research studies conducted by our Energy Unit. Regional leaders commended ERIA’s continuous strong support to the Chair of the ASEAN Summit and the East Asia Summit through the Chairman’s Statement of the Ninth East Asia Summit in November 2014 in Nay Pyi Taw, Myanmar. They further commended ERIA’s resolve to continue to work for the realisation of the AEC.

In the area of research, with the strong support of the Research Institutes Network, ERIA conducted numerous flagship projects such as the AEC Scorecard Phase IV, for monitoring the implementation of the AEC Blueprint, which the ASEAN Economic Ministers strongly mandated. ERIA developed the ASEAN SME Policy Index, a monitoring tool for each ASEAN Member State to develop and implement effective policies on small and medium-sized enterprises (SME). We likewise launched the ASEAN Public–Private Partnership Guidelines in December 2014 to help implement infrastructure projects in the region, and conducted a number of studies related to the Regional Comprehensive Economic Partnership (RCEP) to support the Economic and Technical Cooperation Working Group of the RCEP.

ERIA also completed a vision document of AEC beyond 2015, entitled ASEAN Rising: ASEAN and AEC Beyond 2015, in close cooperation with the ASEAN Economic Ministers. This document is expected to serve as the foundation of post-2015 vision of the AEC. Building on these works, in the beginning of 2015, we initiated to develop a framework for the ASEAN Socio-Cultural Community (ASCC) Post-2015 Vision, in close cooperation with Malaysia—as chair of the ASCC—and the ASEAN Secretariat. This is because we understand that the social and cultural issues covered by the ASCC has a direct effect on the well-being of people in ASEAN and, thus, in AEC.

Finally, ERIA’s efforts in 2014 did not go unnoticed by the international community. In January 2015 the Global Go To Think Tank Report 2014, ranked ERIA as number 28 among the top 50 International Economic Policy Think Tanks. With this, ERIA moved several notches higher from its 30th rank in 2013, thus, gaining further international recognition over 6,500 think tanks from 182 countries. Whilst ERIA has achieved a lot in 2014, it will not rest on its achievements, and will remain committed and work harder towards community building in ASEAN and East Asia.