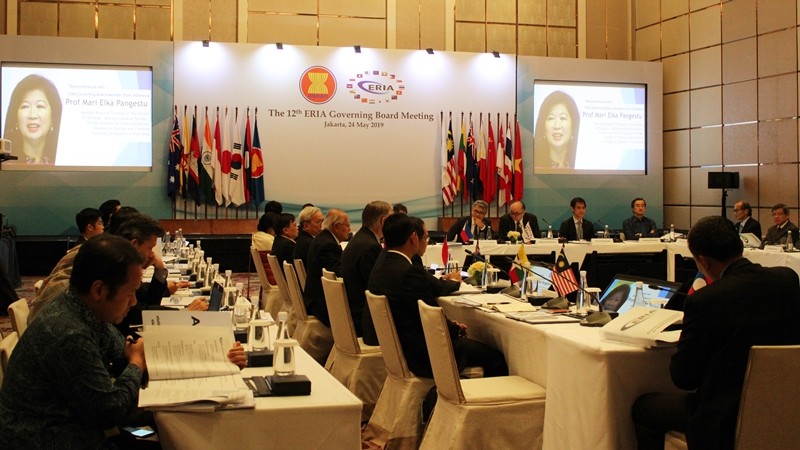 Jakarta, 24 May 2019: The Economic Research Institute for ASEAN and East Asia (ERIA) hosted the 12th Governing Board Meeting at the Fairmont Hotel in Jakarta. The Meeting was led by Atty Adrian Cristobal Jr, in his second year as Chairman of the Board following his appointment the previous year.

The Governing Board is the decision-making body of ERIA and consists of the Secretary General of ASEAN and representatives from each of the 16 member countries.

During the Meeting, the Governors discussed how ERIA can play an active role in responding to policy demands that arise amidst increasing concerns over global and regional trends  which have significant impact on ASEAN and EAS countries.

‘As an organisation, as  a think tank, ERIA has played a role in assisting the political leadership of ASEAN and East Asia with its Dialogue Partners in addressing some of these issues and challenges. We are aware of the recognition accorded ERIA by its peers, having moved to the 14th place among the world’s [economic policy] think tanks thanks to the efforts of ERIA’s team led by Professor Nishimura-san. Looking forward to the next decade of ERIA, as Chair, I believe that the challenges and issues that our region faces are different in nature, scope and intensity. Many of these subjects have not been fully understood even by the experts,’ said Chairman Cristobal in his remarks.

Hon Dato Lim Jock Hoi, Secretary General of ASEAN,  stated in his opening remarks, ‘The success of ASEAN will be measured on its resilience; how we stay on course in our integration efforts and towards sustainable development; how we can shape the new economic architecture through RCEP; and how we respond to emerging issues and developments arising from an interconnected world as an ASEAN Community, including in multilateral settings.’

In addition to presenting the research activities and work plan of the healthcare department, the Special Advisor to the President for Healthcare and Long Term Care Policy Dr Osuke Komazawa promoted the Asia Health and Wellbeing Initiative website that was launched in January 2019. The website was developed in partnership with Japan Center for International Exchange (JCIE) to disseminate key data and resources on ageing in Asia and share best practices to respond to this demographic shift.

Capacity Building Director Mr Jeremy Gross presented the activities of Capacity Building Programme (CBP) in the previous fiscal year, in which they held 13 activities and reached out to 300 government officials. Governors praised the CBP, which aims to bridge the gap between research and national policymaking especially in Cambodia, Lao PDR, Myanmar, and Viet Nam. Governors also encouraged CBP to improve its collaboration with the Research Department and the Policy Design Department for future training programmes.

In light of the geopolitical challenges, Governing Board members emphasised the importance of using evidence-based academic research as a catalyst for effective policymaking decisions. The Governing Board also remained committed to multilateralism and international cooperation as the way forward against the backdrop of global instability.

The 12th Governing Board Meeting was the first Meeting for some of the new Governors including Malaysia’s Ministry of International Trade and Industry (MITI) Secretary-General Mr Lokman Hakim B. Ali. It was also the last Meeting for the Governor of ERIA from Japan, Mr Fujio Mitarai, the Chairman and CEO of Canon, Inc. In his closing remarks, ERIA President Prof Hidetoshi Nishimura praised Mr Mitarai, for his contribution to ERIA from 2013 to 2019. ‘Without his strong support, ERIA would not have survived until this day.’