Words and Their Silos: Commercial, Governmental, and Academic Support for Japanese Literature and Writing Overseas 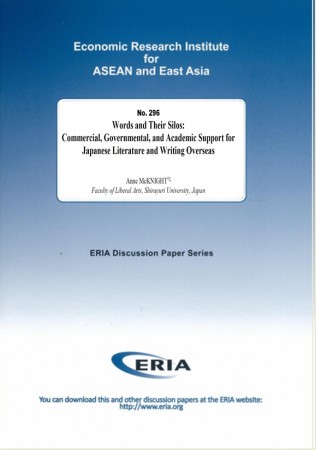 This paper connects in a preliminary way realms of analysis and data regarding practices of disseminating Japanese literature and writing translated in English and Association of Southeast Asian Nations (ASEAN)–located languages since about 2000. The assumption is that translations from different languages have been consistently silo’ed – separated and allowed to accumulate and dynamically evolve. I outline a history of the de-linking of ‘writing’ from ‘literature’ as well as language study itself, which has led to both a withdrawal and an explosion of funding since about 1990. I note secondary effects of re-concentration in English and European languages, a flourishing of small-press activity and writing on food (Jonathan Gold) and self-help (Kondo Marie), and a focus on the ‘authorised translator’ model in both English and ASEAN languages following a tendency to standardise copyright law. Second, I introduce some histories and distinctive practices that could model support for translators. Last, I discuss economies of both money and prestige in different practices, and offer some suggestions based on interviews with an eye to supporting translators so that all languages have a hand in creative practice, and English-language–based translators can collaborate with translators in other languages.