industry and manufacturing, Innovation and Technology 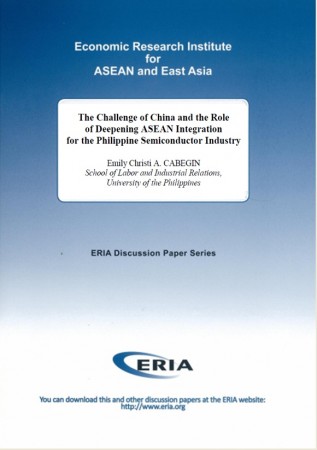 From a rising share in the global semiconductor market in the 1990s, which peaked at 7.7 percent in 1999, the standing of the Philippines has since weakened with shares declining to four percent in 2005 and 2.5 percent in 2012. Heavy reliance of the Philippine semiconductor industry on foreign capital, which was concentrated largely in the United States and Japan for the most part of the past two decades, had made it vulnerable to trade risks faced by these countries that resulted in significant downturns in exports in 2001 and 2009. The erosion in the worldwide market share for the Philippines was also associated with the phenomenal rise of China as a dominant global supplier in the 2000s for advanced packaging and test services. Lacking technological capability, the Philippine semiconductor industry was pushed farther down the lower tiers of back-end manufacturing as it struggled to compete in this market with China, which sustained a strong technological leadership. Unlike the more developed Association of Southeast Asian Nations (ASEAN) member countries of Singapore and Malaysia, which have demonstrated upgraded technological intensities and have more diversified international production linkages, the Philippines has failed to optimize the huge opportunity to tap into China's large and growing semiconductor market and to attract Chinese capital inflow. Increased investments from Taiwan, South Korea, and Singapore in the 2000s, alongside a deepening ASEAN integration and economic interdependence, have cushioned the negative impact of the global crisis on Philippine semiconductor trade. This paper recommends policy reforms for the Philippines to facilitate its transition to more knowledge-intensive, higher-value operations.