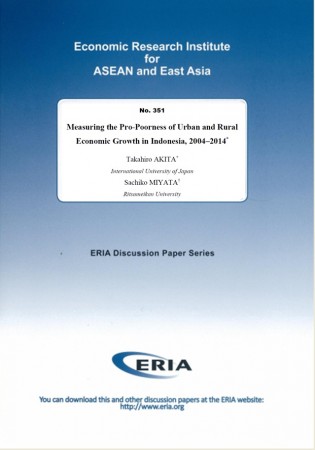 This study measures the pro-poorness of urban and rural economic growth by region from 2004 to 2014 in Indonesia using pro-poor growth indexes, with data from the National Socio-Economic Survey (Susenas). It also conducts a probit analysis to explore the determinants of poverty. All regions (Sumatra, Java–Bali, Kalimantan, Sulawesi, and East Indonesia) experienced a substantial increase in expenditure inequality in both urban and rural areas; thus, the change in poverty incidence due to redistribution effects is positive. Apart from East Indonesia, they reduced the incidence of poverty in both areas, but their growth was not pro-poor in the strict sense. According to the pro-poor growth indexes, urban areas performed better than rural areas; in most regions, the growth of urban areas was moderately pro-poor, while that of rural areas was weakly pro-poor or anti-poor. The government needs to take urban–rural and regional differences into account when formulating poverty alleviation policies and programs since these differences would affect economic growth and changes in inequality.