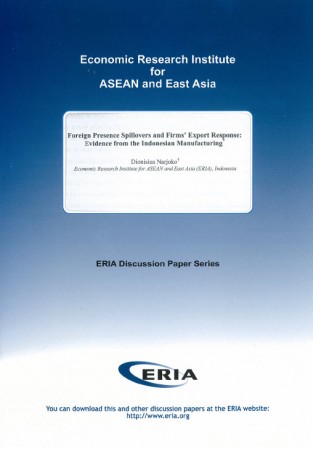 This paper examines the existence of spillovers associated with the presence of multinational enterprises (MNEs) on a firm's decision to export, and on export intensity. It utilizes data from Indonesian manufacturing for the census years 1996 and 2006. Channels through which MNEs can affect other firms' export behavior are considered and tested. The econometric analysis suggests that the contribution of MNEs in improving technological knowledge raises the likelihood that domestic firms will enter the export market, and improves export performance. The analysis finds weak evidence to support the hypothesis that competition, created by the operation of MNEs, facilitates entry into export markets. Further analysis however shows that the impact of competition depends on the level of productivity of the domestic firms. In particular, the more productive firms are suggested to have been able to benefit more than the less productive ones. The overall analysis suggests that given the mixed evidence, policies to promote MNEs are still worth pursuing. The most obvious justification comes from the positive impact of the increased pool of technological knowledge. Other than this, strengthening trade facilitation seems to be a positive proposition, given the finding that many of the new domestic exporters seem to have been constrained in increasing their exports.