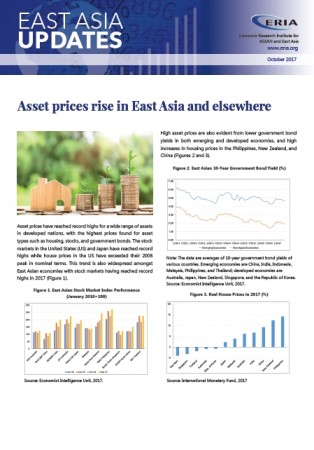 Asset prices have reached record highs for a wide range of assets in developed nations, with the highest prices found for asset types such as housing, stocks, and government bonds. This trend is also widespread amongst East Asian economies with stock markets having reached record highs in 2017, lower government bond yields, and high increases in housing prices in several East Asian countries. While data in asset market has shown positive development, it should be examined whether they are also a reflection of robust real sector development in key countries.

Prospects of cryptocurrencies in East Asia

Since their introduction in 2009, Bitcoin and other cryptocurrencies have left academics and government officials puzzled about how to regulate such intricate monetary instruments. While the underlying technology used by cryptocurrencies, the blockchain, is a revolutionary technology that enables the creation of a decentralised digital ledger that can keep track of every transaction made by users, application of this new technology has many consequences for both regulators and practitioners.