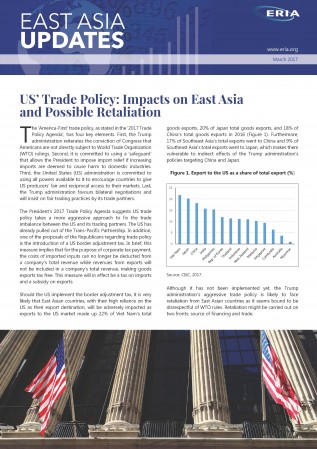 US' Trade Policy: Impacts on East Asia and Possible Retaliation

After three months in power, President Trump has proved that he is intent on keeping his campaign promises to curb imports from overseas and take a step back from multilateral agreements the US had traditionally championed. Should the US implements the protectionist trade policies, it is very likely that East Asian countries, with their high reliance on the US as their export destination, will be adversely impacted as exports to the US market made up 22% of Viet Nam's total goods exports, 20% of Japan total goods exports, and 18% of China's total goods exports in 2016. Although actual policy measures taken so far are still limited and require the approval of the US Congress, it is clear that the current administration is unfavourably disposed towards free trade. At the same time, it is still unclear how the East Asian countries would react as there are potential costs and benefits arising from retaliatory measures both through the financial system and through trade policies.

The US central bank, the Federal Reserve (Fed), raised its target range for the federal funds rate (FFR) from 0.75% to 1% in March 2017, the third time the Fed raised interest rates in the last decade. Although traditionally Fed rate increases have adversely impacted foreign economies through currency depreciation and stock index drops as the capital flows back to the US, the two rate increases in December 2016 and March 2017 have not adversely affected East Asian countries. This is evident from the upward trend of East Asian stock indexes and the relatively stable US exchange rate in the past 3 months.