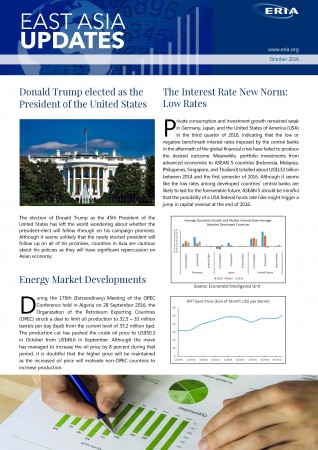 The election of Donald Trump as the 45th President of the United States has left the world wondering about whether the president-elect will follow through on his campaign promises. Although it seems unlikely that the newly elected president will follow up on all of his promises, countries in Asia are cautious about his policies as they will have significant repercussion on Asian economy.

Private consumption and investment growth remained weak in Germany, Japan, and the United States of America (USA) in the third quarter of 2016, indicating that the low or negative benchmark interest rates imposed by the central banks in the aftermath of the global financial crisis have failed to produce the desired outcome. Meanwhile, portfolio investments from advanced economies to ASEAN 5 countries (Indonesia, Malaysia, Philippines, Singapore, and Thailand) totalled about US$132 billion between 2014 and the first semester of 2016. Although it seemslike the low rates among developed countries' central banks are likely to last for the foreseeable future, ASEAN 5 should be mindful that the possibility of a USA federal funds rate hike might trigger a jump in capital reversal at the end of 2016.

During the 170th (Extraordinary) Meeting of the OPEC Conference held in Algeria on 28 September 2016, the Organization of the Petroleum Exporting Countries (OPEC) struck a deal to limit oil production to 32.5 - 33 million barrels per day (bpd) from the current level of 33.2 million bpd. The production cut has pushed the crude oil price to US$50.3 in October from US$46.6 in September. Although the move has managed to increase the oil price by 8 percent during that period, it is doubtful that the higher price will be maintained as the increased oil price will motivate non-OPEC countries to increase production.