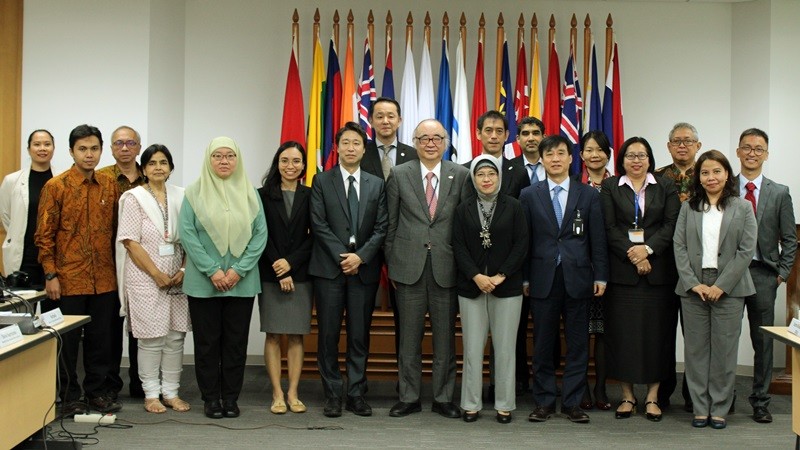 Previous roundtables were held in Singapore, Manila, and Tokyo and focused on topics including Euro-area economic uncertainty and its implications for Asian economies, new growth models in Asia, the impact of monetary easing in the OECD on the Asian economies, middle-income trap, and challenges in energy sector, digitalisation, as well as some other topics.

The first session examined challenges facing global trade and multilateralism such as rising protectionism, unequal opportunities to engage in global value chains, and legal systems that are inadequate for digital economy and international trade in services. Policies and actions to strengthen the global economy and the WTO are required to improve the global trading system and reinstate multilateralism. ASEAN and East Asia have a special role to play in this task, leading by example.

Ms Anita Prakash, Director of Policy Relations, ERIA, moderated the event.  She noted the deep fault lines that originated with the financial crisis and exist until today.  The global trading system is marked by ‘unequal opportunities to engage in global trade and value chains, especially for small countries,’ she said.  She also noted the challenges posed by the shift to services and the onset of the digital age.

Dr Siswo Pramono, Director General/Head of Policy Analysis and Development Agency in the Ministry of Foreign Affairs of the Republic of Indonesia, presented on the same theme, focussing on the geopolitical aspects, noting that the trade war is not just a trade war, but includes ‘tinges of a cold war and a proxy war.’ In his presentation, he reviewed the importance multilateral trade agreements, noting that RCEP would be the largest in the world, but includes more fragile states than the other large trade agreements (NAFTA and EU).  Dr Amalia Adininggar Widyasanti, Senior Advisor to the Minister of National Development Planning for Economic Synergy and Financing, looked at what the region should do to respond to an unending trade war, noting that the ‘trade war’ is actually multiple trade wars. Focusing on Indonesia and Japan, she notes that neither will be significantly affected in the short run. However, over the long run, the trade wars will have a negative impact on the global economy. Indonesia needs to prepare by attracting more investment to induce accumulation in the long term and increasing total factor productivity through infrastructure development, regulatory efficiency and re-industrialisation. (See presentation here)

The second session focused on improving the quality of education and human capital development in emerging Asia.  It is key in reducing poverty, raising labour productivity, expanding economic potential and improving overall social welfare. With the deepening of digitalisation, the stakes have risen in making education more responsive to the possible changes in skillset that the domestic labour market will likely demand in the future. The Head of Asia Desk in OECD, Mr Kensuke Tanaka, presented some of the key findings of the OECD’s Economic Outlook for Southeast Asia, China, and India 2019. He discussed some of the growth risks and structural challenges faced by countries in the region, namely trade tension, opportunities and risks of financial technology, impact of natural disasters, digitalisation, traffic congestion, and education. Meanwhile, the Head of Early Childhood and Schools Division in the OECD, Ms Yuri Belfali, discussed the trends in students’ performance and ways to improve the quality of education amidst the development of artificial intelligence and education priorities proposed by employers.

The third session addressed urbanisation in Asia and its role in driving economic growth.  Cities host dynamic firms and create productive jobs, with agglomerations resulting in better matches between workers and jobs, strong input-output linkages, and more knowledge spill overs. But the way developing Asia is urbanising—in terms of speed, size, the extent of planning, infrastructure provision, and urban governance—may not be optimal for nurturing the growth of dynamic firms and creating productive and well-paying jobs. This may have implications for development prospects in the region.

The fourth session looked at building capacity and connectivity in ASEAN+3 economies and how they have come a long way since the Asian Financial Crisis. Following a period of consolidation and rebalancing, economies in the region embarked on a diversified growth strategy while building economic and financial resilience. Development priorities during the next growth phase will shift to enhancing capacity and connectivity, especially infrastructure investment needs and the scope for region-wide initiatives, as presented by Ms Lam San Ling, a consultant with AMRO. She provided a brief overview from the thematic chapters of AMRO’s ASEAN+3 Regional Economic Outlook 2019.

Session 2 - Totok Suprayitno - Toward a Better Learning Outcome: A Reflective View on Our Education

Session 5 - Hariyadi - Fiscal Sustainability in the Era of Aging Population