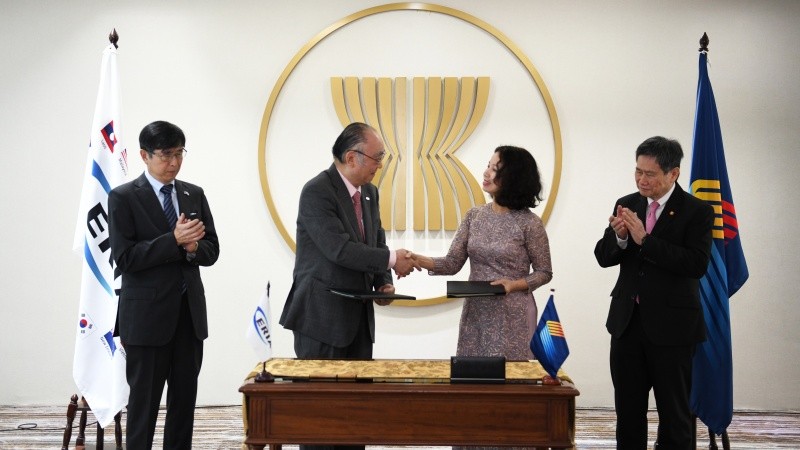 Jakarta, 22 January 2020: The signing ceremony of the renewed ‘Memorandum of Understanding to Develop the ASEAN Inter-Parliamentary Assembly (AIPA)'s Capacity on Matters Concerning ASEAN Economic Community and ASEAN  Economic Integration in Various Areas’ between AIPA and the Economic Research Institute for ASEAN and East Asia (ERIA) took place this morning at the ASEAN Secretariat.  AIPA was represented by Hon Nguyen Tuong Van, Secretary General of AIPA, and ERIA was represented by Prof Hidetoshi Nishimura, the President of ERIA. The ceremony was witnessed by H.E. Dato Lim Jock Hoi, Secretary-General of ASEAN and HE Mr Akira Chiba, Ambassador of Japan to ASEAN.

AIPA was established on 2 September 1977 as ‘AIPO’ to promote solidarity, understanding, cooperation and close relations among parliaments of ASEAN Member States, other parliaments and parliamentary organisations. AIPA serves as a regional parliamentary forum to study, discuss and suggest solutions to problems of common interest and express its views on such issues with the aim of bringing about action and timely response by the members of the AIPA; and to promote the principles of human rights, democracy, peace, security and prosperity in ASEAN.

ERIA is an international organisation based in Jakarta, Indonesia whose purpose is to conduct research activities and make policy recommendations for economic integration in East Asia.  As the leading economic think tank in the region and the Sherpa institution for the ASEAN Summit process (including the East Asia Summit), ERIA’s research has influenced the policy-making process in the region and has facilitated the implementation of the ASEAN Economic Community.

Since AIPA and ERIA signed the MoU titled ‘Develop AIPA’s Capacity on Matters Concerning ASEAN Economic Community and ASEAN Economic Integration in Various Areas’ on 16 December 2016 (ERIA and AIPA Sign MoU to Support ASEAN Parliamentary Members), they have engaged in several activities to accelerate the economic integration process. One of the activities under the MoU is a joint dialogue titled ‘Parliamentarians Supporting the ‘Quiet Revolution’ for Better Regulatory Governance’, which contributed to better understanding of AIPA parliamentary members on non-tariff measures (NTMs) and barriers as well as good regulatory practice and reducing unnecessary regulatory burdens (ERIA and AIPA Hold Dialogue with Parliamentarians on Better Regulatory Governance).

At the 40th AIPA General Assembly on 25-30 August 2019 in Bangkok, Thailand, a resolution on ‘Establishing AIPA-ERIA Joint Dialogue to Support the Waste Management for Sustainable Development’ was adopted by the all AIPA member countries at the second plenary session on 29 August (ERIA Attends the 40th General Assembly of the ASEAN Inter-Parliamentary Assembly). Based on the resolution, ERIA and the AIPA Secretariat will organise a Joint Dialogue to support proper waste management for sustainable development in ASEAN countries.

The renewed MoU is expected to encourage AIPA and ERIA to further expand their fields of activities.