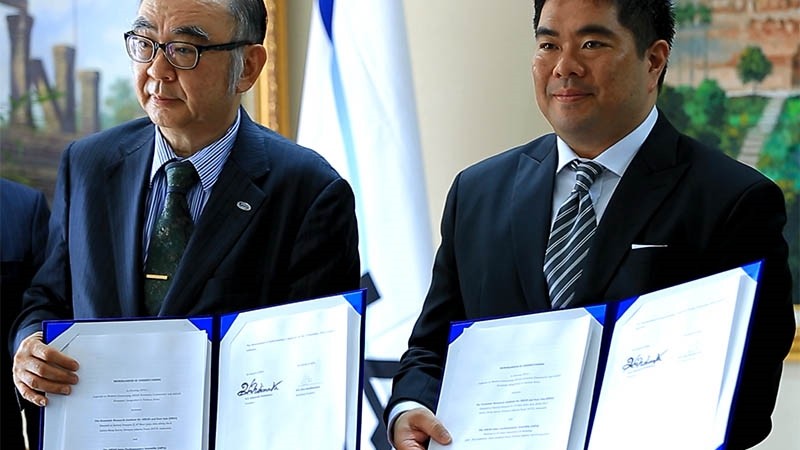 The Economic Research Institute for ASEAN and East Asia (ERIA) signed a Memorandum of Understanding (MoU) with ASEAN Inter-parliamentary Assembly (AIPA) on 16 December 2016 in Jakarta.

The MoU stipulates the cooperation between AIPA and ERIA in terms of research, capacity building programmes, as well as exchange of information regarding research outcomes and policy recommendations for economic related matters.

Secretary General Sunthornvut stated that AIPA is in the process of formulating projects and initiatives that will move AIPA and ASEAN forward.

He expressed his hope that AIPA and ERIA can gather relative stakeholders (Parliamentarians, civil society, academics, ERIA economists and Policy Fellows, and the Peoples of ASEAN), to discuss issues important for ASEAN: social, political, and economic issues.

Mr Fukui stated that the parliaments and ERIA have their limits; however, the purpose of the MoU was for the organisations to reach a higher level of cooperation and he hoped that other organisations will follow suit.

Ambassador Sunaga stated that the MoU was a great step forward in promoting the cooperation between ERIA and Japan.

AIPA was established as a regional parliamentary organisation on 2 September 1977 as AIPO and later renamed as ASEAN Inter-Parliamentary Assembly. Its members comprise of Parliaments of Brunei Darussalam, Cambodia, Indonesia, Lao PDR, Malaysia, Myanmar, the Philippines, Singapore, Thailand and Viet Nam. AIPA aims and purposes are to promote solidarity, understanding, cooperation and close relations among parliaments of ASEAN Member States, other parliaments and parliamentary organisations; to study, discuss and suggest solutions to problems of common interest and express its views on such issues with the aim of bringing about action and timely response by the members of AIPA; and to promote the principles of human rights, democracy, peace, security and prosperity in ASEAN.

ERIA is an international organisation based in Jakarta, Indonesia whose purpose is to conduct research activities and make policy recommendations for increased economic integration in East Asia. Since its founding in 2008, ERIA has developed extensive experience in the South East Asia region and, through its research, supports the ASEAN economic integration process and structural reforms in ASEAN Member States. As the leading economic think tank in the Region and the Sherpa institution for the ASEAN Summit process (including the East Asia Summit), ERIA's research has influenced the policy making process in the Region and has facilitated to implement an ASEAN Economic Community.