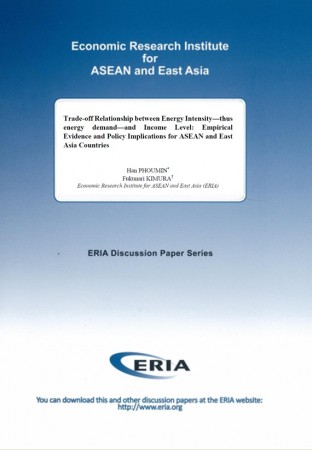 This study has been motivated by the recent shift of energy demand's gravity to Asia due to decades of robust and stable economic growth in the region. Said economic growth has correspondingly led to increases in per capita income in emerging economies in ASEAN and East Asia. Past empirical studies showed that energy intensity -thus energy demand-- tends to grow at an early stage of development. However, curbing the energy intensity remains central to green growth policy. Thus, this study formulates the hypothesis on whether energy intensity - thereby energy demand - starts to fall as a country becomes richer. Based on this hypothesis, this study aims to investigate: (i) the non-monotonic relationship between energy demand and income levels in selected ASEAN and East Asia countries; (ii) the short- and long-run association of energy demand with price and income level; and (iii) the country performance in curbing the energy intensity. The study employs panel data model, pool-OLS, and historical time series data of individual countries with Vector Error Correction Model (ECM) for the analysis of the above objectives. The findings have suggested three major implications. One, it found that energy intensity --thus energy demand -- has a trade-off relationship with income level which contributes to the theory of energy demand. Two, energy demand has a trade-off relationship with income level, albeit the fact that each country has a different threshold level, implying that whatever the level of per capita income a particular country has, that country can curb energy intensity if it has the right policies in place. And three, countries with persistently increasing energy intensity will need to look into their energy efficiency policies more aggressively to ensure that structural changes in the economy do keep the energy efficiency policy to its core.