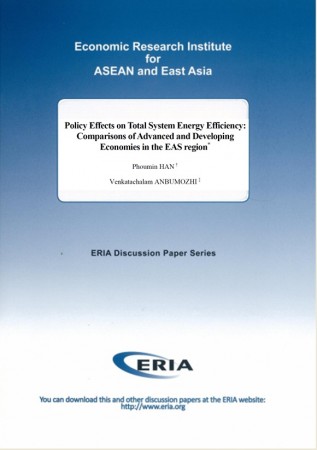 The study attempts to assess the policy effects and investigate the patterns of Total System Energy Efficiency (TSEE) in the economies of some selected Association of Southeast Asian Nations (ASEAN) and East Asia countries. Using time series data for 1971-2011, a dynamic lag model of TSEE was formulated. The study starts by constructing the variables of fuel input and fuel output based on engineering concepts. We expect that the TSEE in these economies is likely to be explained by both foreign direct investment (FDI) and domestic investment. And above all, the policy effect will be the prime investigation for all changes in TSEE. The study found that policy effects on TSEE are likely to have occurred in Japan, the People's Republic of China (PRC), the Philippines, Thailand, and India. However, a closer look and examination of each country's economy are needed to understand TSEE changes and fluctuations. Another key determinant of TSEE is inward FDI (FDI-inflow), as a result of which the PRC and India have shown positive impacts. Our findings led to the following key policy recommendations: (1) the PRC and India provided good examples of using FDI-inflows to impact TSEE. This implies that the transformation sector will need large investments and public financing will play crucial role in an improvement of the transformation sector; and (2) the developed economies of Japan, the Republic of Korea, and Australia provided mixed outcomes in terms of how the Cebu Declaration is likely to have had an effect. Japan showed some effect, but there was no effect on TSEE in South Korea and Australia. Thus, it is hard for the developed economies to jump further from the high base efficiency, unless there is a technological breakthrough of high efficiency like in Japan. Therefore, we will discuss technological transfer in the transformation sector such as high efficient power plants in the context of a public financing framework to ensure that such technologies could be deployed to the developing economies as well as globally.