Globalization and Performance of Small and Large Firms 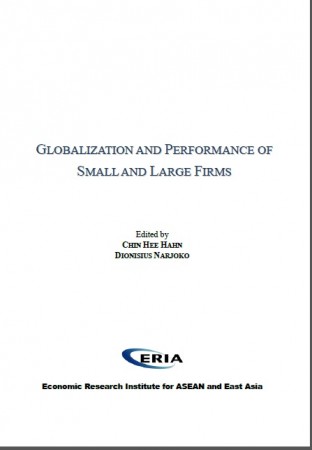 ERIA Microdata Research FY 2013 examines whether and how globalization has differential effects on small and (or versus) large firms and aims at identifying policy issues to be addressed to achieve stronger and more resilient economic growth in East Asian countries. Globalization in this research is broadly defined to include trade and foreign direct investment (FDI) liberalization, trade (exports and imports), international capital flows, outsourcing and traded intermediate goods. The research conducted 10 country studies for 8 countries in the Asia-Pacific region, namely, China, Indonesia, Japan, Korea, Malaysia, Philippines, Thailand, and Viet Nam.

Growth performance of many East Asian countries has been far above the international standard. There is a growing consensus that one key factors behind is the increasing integration between these economies with the global market. However, there is also a growing concern that the growth performance has been very uneven across firms not only in developed countries such as Japan and Korea but also in developing countries such as Indonesia and Viet Nam. There seems to be a popular belief that firm performances are divergent, particularly along the dimension of firm size. It is often claimed that the diverging performance is caused by globalization. Compared to large firms, small firms (or SMEs - small and medium enterprises) are at a disadvantage to adjust to globalization in terms of adjustments to an increased import competition, expanded export opportunities, enlarged foreign investment opportunities, and increased global production sharing. The perceived view on the divergence and its possible linkage with globalization, irrespective of the existence of its factual basis, has become an important economic or socio-economic policy issue in many countries. This research attempts to shed some light on these issues.

Chapter 4. Productivity Evolution of Chinese Large and Small Firms in the Era of Globalization

Chapter 5. Changes in Competition of Small vs. Large Firms from International Trade

Chapter 7. Understanding the Relationship Between Globalization and Survival of Philippine SMEs

Chapter 9. Small and Large Firm Performance Gaps in Indonesia in the Era of Globalization:Evidences from Micro-Data on Manufacturing Establishments

Chapter 10. Globalization and Performance of Small and Large Firm: Case of Vietnamese Firms