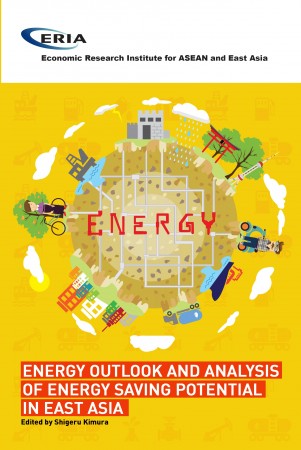 Responding to the Cebu Declaration of the leaders of the East Asia Summit (EAS) countries, ERIA conducted a study on energy savings and CO2 emission reduction potential in the EAS region. The study was first undertaken in 2007 and since then, the study team has met several times a year to update and incorporate more recent information in the study such as energy saving targets and action plans reported at the EAS Energy Ministers Meetings (EMM).

The study examined two energy outlook scenarios up to 2035, namely, Business-As-Usual (BAU) which reflects each country's existing energy policy and Alternative Policy Scenario (APS) which includes additional energy saving goals and action plans currently under consideration in each country. The focus of the study is on analysing the additional energy saving that could be achieved through the implementation of goals and action plans in each country that are beyond the BAU scenario.

Two steps were taken in the modelling of each scenario. In the first step, energy demand equations by fuel type and by final consumption sector consisting mainly of industry, transport, and residential & commercial sectors were estimated, applying the Ordinary Least Square (OLS) method. In the second step, a future simulation model was developed based on the estimated energy demand equations and model assumptions such as future GDP and population.

Modelling results show that the EAS region's final energy consumption in the BAU case is projected to increase by 2.4 percent a year, from 3,112 Mtoe in 2011 to 5,545 Mtoe in 2035. This is based on the assumption that the EAS region's total GDP will increase by 4.2 percent per year on average along with a 0.6 percent annual growth in population. In the APS case, final energy consumption is projected to rise to 4,910 Mtoe in 2035, 11.4 percent less than in the BAU case. CO2 emissions in the BAU case are projected to increase from 3,683 Mt-C in 2011 to 6,492 Mt-C in 2035, implying an annual growth rate of 2.4 percent. In the APS case, on the other hand, CO2 emissions are projected to be 4,855 Mt-C in 2035, 24.9 percent lower than in the BAU case. While the emission reductions under the APS are significant, CO2 emissions in this scenario in 2035 will still be above the 2010 levels and far above the 1990 levels. Scientific evidence suggests these reductions will not be adequate to prevent severe climate change impacts.

Based on the results, ERIA recommended the following :

• Energy efficiency action plans should be set up across all energy consuming sectors, especially industry and transport sectors to reduce energy demand and CO2 emissions.

• Rationalizing the prices for electricity, oil products and natural gas in the near term, including the removal of subsidies, while considering support for low income groups should be looked into more seriously.

International and regional collaboration will contribute to the transfer of EEC & low carbon emissions technologies from developed countries to developing countries. One option to promote this transfer is through the bilateral offset credit mechanism which will help contribute to saving energy and mitigating CO2 emissions

Chapter 4. Energy and Environmental Outlook for the EAS Region