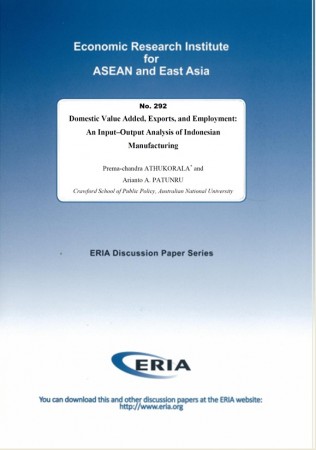 The paper is motivated by the current emphasis on the share of domestic value added in exports (SVEX) as a policy criterion for export development strategy in developing countries. Our hypothesis is that the policy emphasis on SVEX, which harks back to the import substitution era, is inconsistent with the objectives of achieving economic growth with employment generation in this era of economic globalisation. We test this hypothesis by examining the relationship of the SVEX with both export-induced employment and the total domestic value added, or the contribution of exports to gross domestic product, by applying the standard input–output methodology to data from Indonesian manufacturing. Our findings do not support the view, widely held in policy circles, that industries characterised by a higher SVEX have the potential to make a greater contribution to employment generation and total domestic value added. The policy inference is that, in this era of economic globalisation, policy makers should focus on the export potential of industries in designing export development policy, rather than on the SVEX.