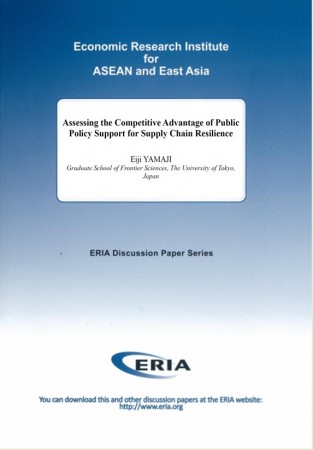 This paper deals with the supply chain resilience of agricultural products in Japan. First, the food flow of Japan is explained. Japanese farmers and fishers produce and sell their products, receiving 9.4 trillion Japanese yen (¥). At the same time, Japan imports raw products and processed food. The fresh products move through the market to the eating out sector, the processing sector, and consumers. During this process, the value of agricultural products increases and consumers pay ¥73.5 trillion. Food flow sometimes suffers disasters, such as heavy rains, flooding, low temperatures, strong winds, volcanic eruptions, earthquakes, and tsunamis. In April 2016, a strong earthquake hit the Kumamoto area, severely affecting the production and supply of watermelons. To increase the resilience of the agricultural supply chain, the sixth industrialisation is effective and well established. Japan's sixth industry contains 60,000 businesses. Most of them are food processing and direct shop businesses. Direct shops are operated by farmers, farmers' groups, farmers' companies, municipalities, cooperatives, and producers' groups. They sell mostly vegetables, fruits, and processed food. Direct shop K is located on the urban fringe of Chiba prefecture. Since it was established in 2004, the shop has become very popular in the region. However, it has had to overcome two crises: the effect of the radioactive fallout from the Fukushima nuclear power plant accident and contamination by residual agricultural chemicals. The manager had a large role in the recovery, but Japan's agricultural policy also provided direct and indirect support at the national and local levels. Public policy supports the resilience of the agricultural supply chain through measures such as agricultural land use planning, agricultural improvement projects, rapid reconstruction following damage, and improvement of agricultural resources.