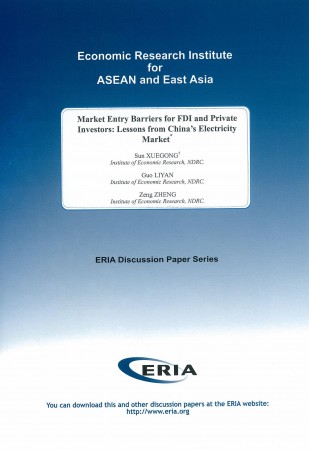 EMI is one of the priorities of regional cooperation identified by leaders from the EAS region. The countries in the region have made great efforts to push for the electricity sector reform so as to boost the participation of private investment. However, a review of these reform experiences suggests that there is significant disparity between the expected and actual outcomes of reform. China has implemented its reform program since the 1990s, and a major reform was introduced in 2002, with the corporatization and unbundling of electricity being achieved. But, a competitive market has not yet been established due to both political and technical difficulties. Motivated by the Power Purchase Agreement (PPA), the participation of private investment in China was expanded in the 1990s. Paradoxically, after the introduction of a major reform in 2002 which created more favorable conditions for the private sector, foreign investors retreated from China. Among other things, the authors identified the fragmented regulatory system, unpredictable pricing mechanism, limited access to transmissions, fuel and financing, and unchecked expansion of the state-owned sector as major barriers that impeded the participation of the private sector. The policy responses and implications of China's experience for the region are also discussed.