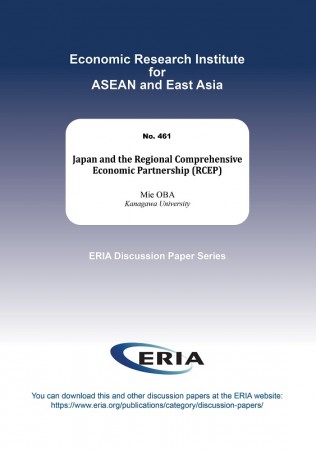 This paper aims to clarify the role of Japan in the process leading up to the establishment of the Regional Comprehensive Economic Partnership (RCEP). While emphasising that respect for the centrality of the Association of Southeast Asian Nations (ASEAN) was a principle of RCEP, Japan played a leading role in the process of RCEP negotiations. For Japan, RCEP is one of the fruits of its strategy in East Asia/Asia-Pacific that began the mid-1990s to protect and increase the interests and advantages of Japanese business and retain Japan’s political leverage in the region.
When substantial negotiations for RCEP began in 2013, its importance for Japan was secondary to other free trade agreements (FTAs) including the Trans-Pacific Partnership, China–Japan–Korea FTA, and Japan–European Union FTA. However, the Government of Japan and the business community had set a lot of economic and strategic goals in promoting RCEP. After the withdrawal of the United States (US) from the Trans-Pacific Partnership, RCEP was seen as an essential framework for establishing a rules-based regional order in the Indo-Pacific region. Although it was after India’s withdrawal from the RCEP negotiations, Japan further emphasised the importance of RCEP as the measure to sustain and foster the rule-based regional order and simultaneously pursued the conclusion of negotiations and the establishment of high-level rules, achieving some success. Ultimately, the havoc brought about by the coronavirus disease (COVID-19) pandemic and the sense of crisis in the traditional liberal international order caused by the intensifying strategic competition between the US and China, drove the conclusion of RCEP.
RCEP will be increasingly important for economic order in Japan and Asia in the coming years. Ironically, as the strategic competition between the US and China escalates and leads to a surge in protectionism, the economic and strategic importance of RCEP – an FTA that incorporates China – is becoming more significant as a measure to counter unilateralism and protectionism. In addition, RCEP needs elements that address globalisation’s adverse effects and pitfalls, in areas such as the environment, labour rights, and a reduction in the disparity between the rich and poor.