International Investment Agreements and Investor-State Disputes: A Review and Evaluation for Indonesia 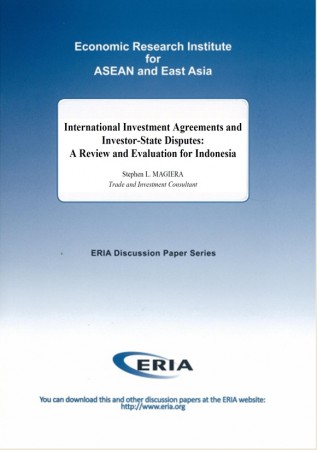 Foreign investors can lodge a complaint against a host country for alleged treaty violations under the Investor-State Dispute Settlement (ISDS) provisions of bilateral investment treaties (BITs). The complaints are arbitrated internationally outside the host country's domestic court, sometimes involve claims exceeding US$1 billion, and give rise to significant financial risk of international arbitration for host countries. Because of this, Indonesia has recently cancelled many of its BITs. But at the same time, Indonesia has agreed to ISDS under the ASEAN Comprehensive Investment Agreement (ACIA) and ASEAN's five agreements with Dialogue Partners. Furthermore, President Joko Widodo has expressed strong interest in joining the Trans-Pacific Partnership (TPP), which contains provisions for ISDS. ASEAN's Regional Comprehensive Economic Partnership (RCEP) will also provide for ISDS. This note reviews the status of Indonesia's international obligations with respect to ISDS, evaluates some of the benefits and costs of ISDS, and reviews the extent to which Indonesia would be undertaking new ISDS obligations under TPP. The note concludes with a discussion of ways that Indonesia can reduce the risk of international arbitration through domestic regulatory reforms.