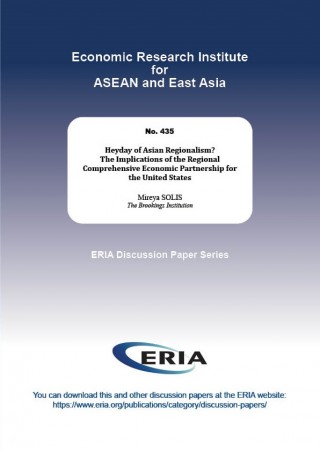 This paper analyses the implications of the entry into force of the Regional Comprehensive Economic Partnership (RCEP) for the United States (US). Traditionally, trade policy has been central to the United States’ aim to position itself as a Pacific power and architect of the evolving regional economic architecture. Over the years, however, US trade strategy has evolved in distinct ways: from an emphasis on bilateral trade negotiations and open regionalism (in the Asia-Pacific Economic Cooperation [APEC] forum) to the pursuit of a high-standard transregional trade agreement (in the Trans-Pacific Partnership [TPP]); and more recently under the Trump administration the pursuit of unilateralism and the resort to tariffs as a form of leverage vis-à-vis competitors (China) and partners (allies in Europe and Asia) alike. When the RCEP negotiations launched, there was little concern in US policymaking circles that the emerging trade grouping in Asia could be disadvantageous for the US given that the TPP project was an effective vehicle to advance the US vision for quality economic integration and to cement its position in the dynamic Asian region. However, the US withdrawal from the TPP and the successful conclusion of the RCEP talks (even with the absence of India) have changed that calculus. This paper identifies three main implications of RCEP for the United States at this juncture: growing marginalisation from intra-Asian trade, diminished rulemaking capabilities as alternative standards disseminate widely in the region, and lessened diplomatic clout as the United States struggles to incorporate trade liberalisation into its Asia policy. A fourth possible consequence – a renewed interest in joining the Comprehensive and Progressive for Trans-Pacific Partnership – has not materialised. Instead, the Biden administration is developing an Indo-Pacific Economic Framework that will not include market access negotiations but will focus instead on issues such as supply chain resilience, infrastructure, and the digital economy. The ability of the United States to offer a compelling plan of economic engagement with the region is in question, raising the spectre of marginalisation whilst Asian regionalism makes strides.