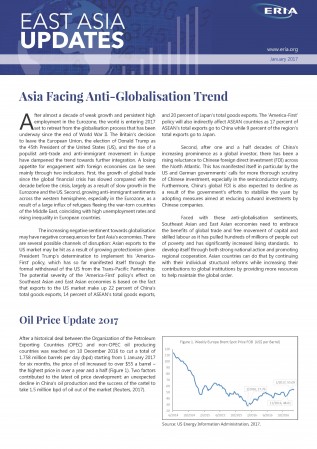 After almost a decade of weak growth and persistent high employment in the Eurozone, the world is entering 2017 set to retreat from the globalisation process that has been underway since the end of World War II. The increasing negative sentiment towards globalisation may have negative consequences for East Asia's economies. One of the possible channel of disruption: Asian exports to the US market may be hit as a result of growing protectionism given President Trump's determination to implement his 'America-First' policy, which has so far manifested itself through the formal withdrawal of the US from the Trans-Pacific Partnership. Faced with anti-globalisation sentiments, Southeast Asian and East Asian economies need to embrace the benefits of global trade and free movement of capital and skilled labour as it has pulled hundreds of millions of people out of poverty and has significantly increased living standards.

After a historical deal between the Organization of the Petroleum Exporting Countries (OPEC) and non-OPEC oil producing countries was reached on 10 December 2016 to cut a total of 1.758 million barrels per day (bpd) starting from 1 January 2017 for six months, the price of oil increased to over $55 a barrel - the highest price in over a year and a half.

Structural Reform across Asia - Prospects for 2017

Asian countries - especially China, Indonesia, India, the Philippines, and Viet Nam - have the potential to improve their productivity levels to catch up with the developed economies. This is due to several factors including their favourable demographic conditions, tolerable levels of debt to gross domestic product (GDP) ratios, and strong commitment to structural reform while China is expected to continue its role as the main driver of the region's growth. To improve their productivity levels and maintain their growth momentum, Asian economies need to intensify efforts to reform their economies to increase their competitiveness on the global stage while continuing to implement sound macroeconomic policies.