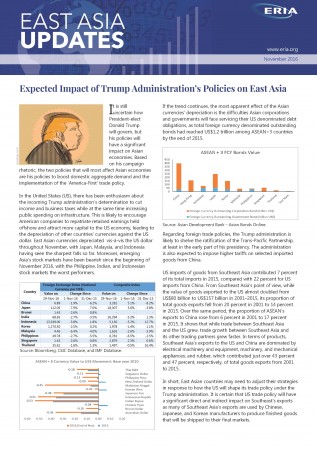 It is still uncertain how President-elect Donald Trump will govern, but his policies will have a significant impact on Asian economies. Based on his campaign rhetoric, the two policies that will most affect Asian economies are his policies to boost domestic aggregate demand and the implementation of the 'America-First' trade policy.

The ASEAN 6 economies, which together make up 95 percent of the ASEAN economy, expanded by 4.2 percent in Q3 of 2016. The weighted average of ASEAN 6 countries' third quarter gross domestic product growth data show it was the slowest pace of growth in 2016. While economic growth in Indonesia, the biggest economy in the region, has been stabilizing at around 5 percent, mixed growth achievements can be seen in the other ASEAN 6 countries. Outside ASEAN, China grew by 6.7 percent, Japan expanded by 0.9 percent, and South Korean economy grew by 2.7 percent in Q3 2016.