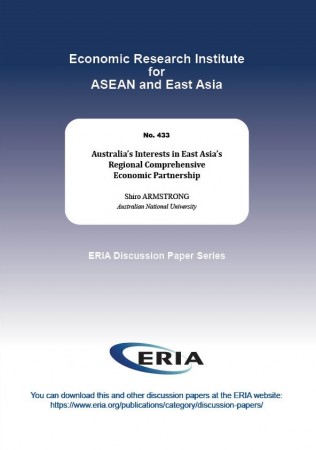 The Regional Comprehensive Economic Partnership (RCEP) agreement was seen as important for Australia economically and politically from its inception. RCEP economies account for roughly two-thirds of Australia’s total trade and being part of an Association of Southeast Asian Nations (ASEAN)-led initiative that progressed broader East Asian economic integration was consistent with the structure of Australia’s trade interests and with Australia’s support for the multilateral trading system. Australia has a track record of pursuing regional cooperation that supports multilateral trade and for supporting regional integration that is outward oriented. RCEP became more important economically, politically, and strategically throughout its negotiations. It furthered East Asian economic integration that avoided fragmentation but also to entrench the ASEAN Economic Community project. Concluding RCEP took on greater importance and urgency as a ballast against the rising protectionism globally in the latter half of 2010. The ASEAN–Australia–New Zealand Free Trade Area (AANZFTA) included an economic cooperation agenda focused on capacity building that was seen as a success for its members and shaped Australia’s approach and support towards economic cooperation being a pillar of RCEP. Negotiations for RCEP were chaired and led by Indonesia and ASEAN. Australia played a proactive role in pushing for high standards – credible market access commitments and new rules – in negotiations. Australia was one of the RCEP member countries that was also negotiating the Trans-Pacific Partnership (TPP) in parallel. The interest in the TPP was to keep the United States productively engaged in the region and to further rule-making and liberalisation amongst the TPP members. Having overlapping membership between the TPP and RCEP would mean that there was less chance of significant divergence or inconsistencies between them, although the approach differed. The deterioration of Australia’s economic and political relationship with China makes the RCEP framework potentially more important for facilitating the rebuilding of trust and confidence.