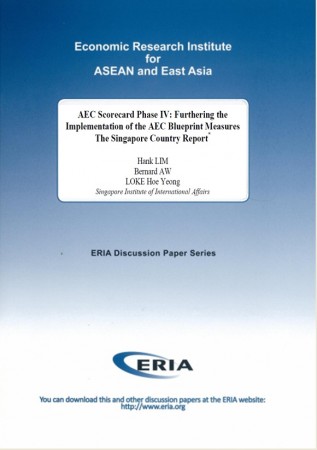 Singapore is an open economy that is critically dependent on leveraging external resources to achieve its economic growth. To achieve that objective, the government is strongly committed to maintaining a free and competitive economy.

In the case of service liberalisation, however, there are a number of restrictions on foreign labour in the service sectors under review that may have an adverse impact on the service sectors. Nonetheless, Singapore is ready to integrate fully into the Association of Southeast Asian Nations (ASEAN) Economic Community (AEC) with most of the service sectors meeting or exceeding the requirements set forth by ASEAN Member States (AMSs), even in the financial, banking, and telecommunication sectors. On Standards and Conformance, there has been some progress for the five sectors under review. However, the progress is described as slow due to sluggish process undertaken by other AMSs. Singapore's approach is to adopt and directly use international standards and technical standards for most sectors, which puts it in a good position to align itself with the agreed ASEAN standards. With regard to the five sectors under review, Singapore has transposed most ASEAN guidelines on Standards and Conformance into national legislation.

A considerable progress has been observed in architectural and engineering services as the implementation mechanisms and processes at both regional and national levels have been established. Regarding this sector, Singapore has generally maintained a liberal immigration policy on professional mobility until recent years. In future, this liberal policy on professional mobility might be adjusted due to increasing domestic political pressure to restrict the inflow of foreign labour. While substantial progress has been made, there is still room to accelerate efforts towards regional integration and facilitation of professional service mobility by prioritising and establishing a template for other designated professions.

On Non-Tariff Measures (NTMs), Singapore is ranked highly as a liberalised trading economy, as there were no divergences between the agreed regulations on non-tariff measures and the actual practice in Singapore, nor is there any bottleneck in implementing non-tariff measures. There is a prevalent understanding and impression that the NTMs are centred on technical barriers to trade, rather than sanitary and phytosanitary measures or non-automatic licensing, quotas, prohibition.

On the ASEAN Comprehensive Investment Agreement (ACIA), the Singapore government has been quite positive in its public statements. In drafting the Reservation List, the government looked to its existing national rules and regulations as its basis. As such, Singapore's Exclusive List document extensively cited the sources of legislation.. It is noted in the study that Singapore does not experience any problems in implementing the ACIA agreement as its Reservation List is one of the shortest amongst those submitted by AMSs.