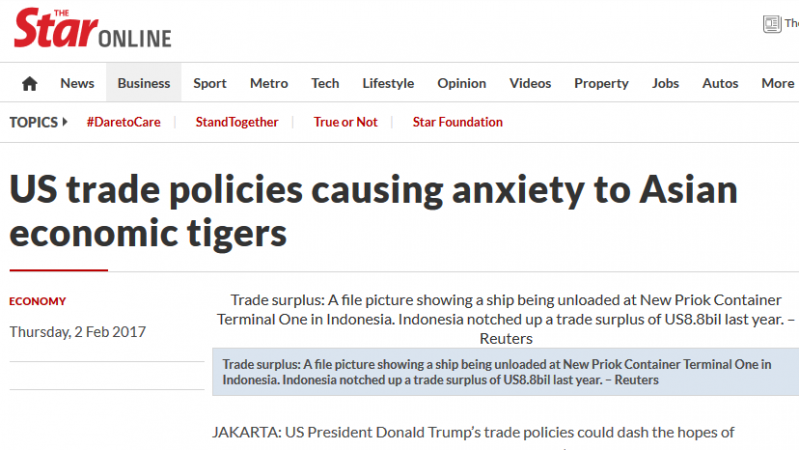 Editor's note: This article was originally published in The Star on 2 February 2017. ERIA's Economist Lurong Chen was quoted.

Signs that Trump is embarking on an era of American protectionism – heightened after he nixed the US-led Trans-Pacific Partnership pact and by his threats to start a trade war with China – are causing anxiety across South-East Asia.

Indonesia, which was not a party to the TPP but had said it would consider joining, is now focusing on an alternative Asia deal that China has begun championing.

At stake for less developed but relatively open economies is the ability to sustain economic growth rates that for Indonesia at least have hovered around 5%, helping lift more of its people into the middle class and giving a large youth population access to jobs.

Trade and investment from the US and China, alongside Japan, has helped propel that.”In the past, emerging markets could have relatively high growth because they could focus their strategy on industrialization and trade,” said Basri, who was finance minister from 2013-2014 and a former chairman of the country’s Investment Coordinating Board. “Now, with the Trump protectionism, they cannot go with trade again.”

Japan, China, Korea, Taiwan and Singapore were aided in becoming industrialised nations as the global economy was open at the time, Basri added. “The rest of the emerging markets probably cannot repeat the success story.”

Facing other headwinds, including a rate-cutting cycle that looks to have ended, Indonesia is the world’s worst-performing emerging stock market since the election of Trump and the only developing South-East Asian exchange to see outflows this year.

Emerging economies generally will struggle in the face of Trump’s policy shifts, with Russia likely one of the few beneficiaries, according to a report from Nomura Holdings Inc.

It warned that US protectionism and possible retaliatory measures could intersect with geopolitical tensions, with “no shortage of potential flash points” including the South China Sea and the Korean peninsula.

While US fiscal stimulus would be a plus for emerging markets, a faster Federal Reserve rate hike cycle and a stronger US dollar expose such markets to capital outflows and credit defaults, it said. “Emerging markets’ economic starting positions already vary greatly and Trumponomics stands to further widen this chasm.”

President Joko Widodo had been weighing whether to join the TPP, once seen as the centrepiece of U.S. economic engagement in Asia. Its demise has thrown the spotlight on the Regional Comprehensive Economic Partnership, a different deal that currently includes China and not the US and was initiated by Asean.

”If we’re considered as an export-driven country then I believe with that situation, we would have to be a little bit anxious here about what is really going to happen, although, this is still in the early part of the administration of Trump,” said Ade Petranto, director for Asean economic cooperation with Indonesia’s foreign ministry.

The immediate priority for Indonesia, Petranto said, “is that we would like to see the progress of the RCEP.”

The next round of talks is planned for February in Japan.

“We have a big expectation that there could be more progress within this year,” he said of the 16-nation pact which aims to levy tariffs and rules on the region’s supply chains, liberalize investment and introduce dispute-resolution mechanisms. Unlike the TPP, it wouldn’t require steps to protect labor rights or improve environmental standards.

Still, even with progress on RCEP, and a fresh push on bilateral deals, momentum for free trade is at risk of slowing. And a potential trade war between the U.S. and China could have ripple effects on South-East Asia, even as President Xi Jinping speaks publicly about China’s support for globalisation. China is Indonesia’s largest trading partner.

While Indonesia is one of the least trade dependent economies among its neighbours, its exports surged almost 16% in December last year, with South-East Asia’s biggest economy notching up a trade surplus of US$8.8bil across 2016. The recovery in both exports and imports was spurred by stronger commodity prices.

Other Asian nations have been tracking a similar path, with Singapore’s exports climbing 9.4% in December from a year earlier.

China’s economy meanwhile has been slowing – last year it expanded at its slowest pace in a quarter of a century –- and could be hurt more if Trump slaps big tariffs on the country’s goods.

For that reason Basri, who was in office for the initial stages of the Asean-led RCEP, said any trade deal that does not include the US “will not be optimal.”

”The three largest locomotives of trade are the US –- it’s the largest –- the EU and China.

“The EU is slowing down now, especially after Brexit.

“China is slowing down. So the only hope is the US,” he said.

“But if Trump seriously implements these protectionist measures then this high economic growth in the US will not have a positive impact on Indonesia because he will erect barriers.”

Lurong Chen, an economist at the Economic Research Institute for Asean and East Asia, said globalisation provided a reform-friendly environment for nations like Indonesia.

“Any setback of this process tends to increase the difficulty in promoting domestic economic reform.” – Bloomberg