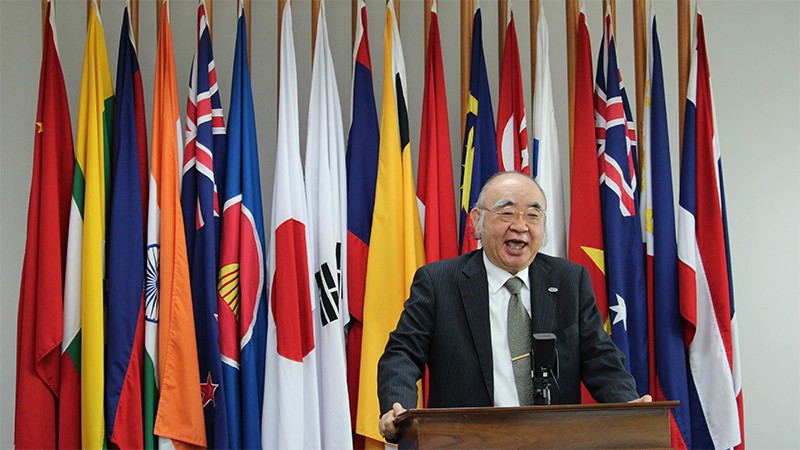 Jakarta, 10 January 2022: ERIA, in collaboration with the Foreign Policy Community of Indonesia (FPCI) and the Ministry of Economy, Trade and Industry of Japan (METI), the ASEAN-METI Economic Cooperation Committee (AMECC), held a virtual public forum as a part of the Dialogue for Innovative and Sustainable Growth between Japan and ASEAN (DISG) titled 'The Next Chapter of ASEAN and Japan Economic Cooperation in the Post-Pandemic Era'. The webinar was held on 10th January 2022 and attracted more than 600 participants from about 50 countries. Professor Hidetoshi Nishimura, the President of ERIA, delivered his opening remarks and Professor Fukunari Kimura, the Chief Economist of ERIA, participated in the event as one of the speakers.

In the webinar, Dr Dino Patti Djalal, the Founder and Chairman of FPCI, and Mr Arsjad Rasjid, the Chair of Indonesian Chamber of Commerce and Industry (KADIN), also gave opening remarks. Following the opening remarks, His Excellency Koichi Hagiuda, the Minister of Economy, Trade and Industry of Japan, gave the keynote speech.  Subsequently, the webinar discussed ASEAN-Japan’s new economic cooperation with the two speakers, Professor Fukunari Kimura and Dr Nuki Agya Utama, the Executive Director of the ASEAN Centre for Energy.

Mr Arsjad Rasjid gave his opening remarks and stated that the visit of Minister Hagiuda is pivotal for strengthening the bilateral relationship of Indonesia and Japan especially in the area of trade and investment.

Professor Nishimura, in his opening remarks, emphasized that Minister Hagiuda’s visit to Indonesia and other ASEAN countries has never been timelier because ASEAN is faced with a historical turning point for sustainable and innovative transition. He also stated that it is of paramount importance to thoroughly assess ASEAN's current condition and make large-scale, future-oriented investments.

Minister Hagiuda, in his keynote speech, announced a new economic cooperation initiative called ‘Asia-Japan Investing for the Future Initiative (AJIF)’ that aims to promote investment in supply chains, connectivity, digital innovation, and human resources for the ideal image of the future such that ASEAN and Japan improve their attractiveness as a global supply chain hub and take the lead in resilient ‘free trade with trust’. He also stated that ASEAN and Japan will continue to create innovations that enhance sustainability and contribute to solving social issues in the region. He also touched upon the ‘Asia Energy Transition Initiative (AETI)’ that had announced last year, and he reconfirmed that Japan continues to strongly support ASEAN’s energy transition.

Professor Kimura, in the discussion session, emphasized that ASEAN is at the center of ‘Factory Asia’ and that the US-China competition and geopolitical tensions may actually strengthen the importance of ASEAN. To strengthen ASEAN’s position in Factory Asia, he insisted that a rules-based trading regime and favorable business environment are essential soft infrastructure. He also said that collaboration between traditional industries and digital businesses requires alignment between incremental innovation and disruptive innovation, and Japan, which has large incremental R&D stocks, can cooperate with ASEAN, which has significant potential for disruptive innovation.

Dr Nuki talked about ASEAN’s energy transition in the discussion session. He insisted that the reduction of greenhouse gas emissions in ASEAN is an urgent matter and that is only possible with breakthrough innovation and effective technology. He also stated that Japan’s AETI is key to accelerating the energy transition in Asian region.

Visit the METI’s website
EVENT REPORT
This event has been covered by several media: