Symposium on "Towards a People-Centered ASEAN Community: Strengthening SMEs in ASEAN" 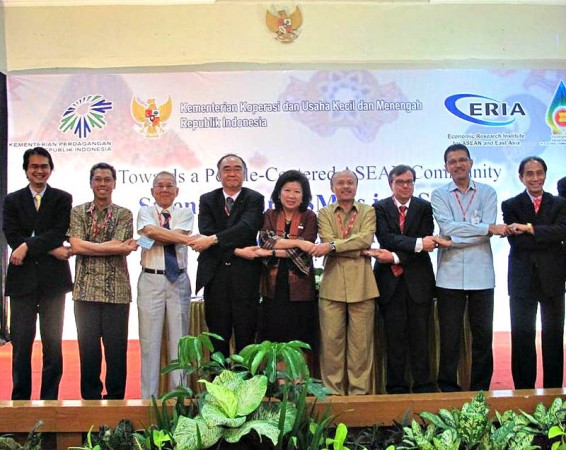 ERIA, Ministry of Trade (MoT) and Ministry of Cooperatives, Small and Medium Enterprises (MoCSME) of Indonesia held a Symposium on "Towards a People-Centered ASEAN Community: Strengthening SMEs in ASEAN" on 2 May 2011 in Jakarta, Indonesia, in the run-up to the ASEAN Summit in May with around 200 participants.

Considering that small and medium enterprises comprise around nine out of ten enterprises in the ASEAN region, it is clear that SMEs are front and center as channels through which ASEAN integration benefits the widest number of people in the region. In short, there cannot be a people-centered ASEAN Community without a robust and growing SME Sector. Based on this understanding, the symposium was held.

During the Symposium, a fruitful discussion was conducted. The Symposium's report will be reported to the ASEAN Economic Community Council which will be held a few days later, and finally to the ASEAN and East Asia Summit this year.