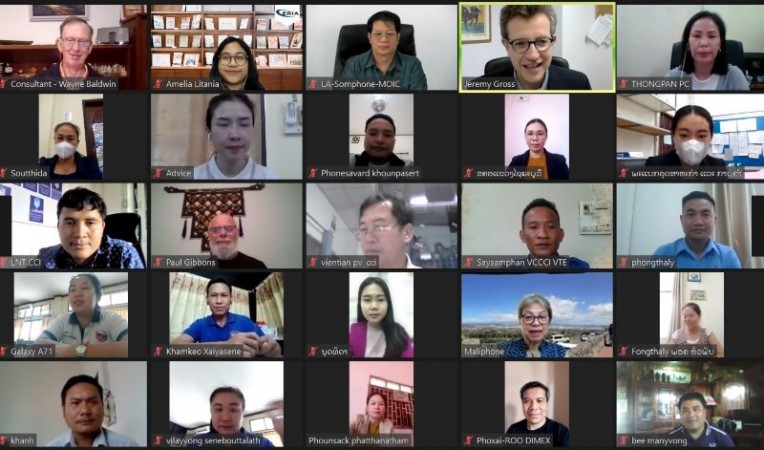 Vientiane, 25-29 April 2022: With the Regional Comprehensive Economic Partnership (RCEP) coming into force on 1 January 2022, countries including Lao PDR are looking to make the most benefit of this agreement. The chapter on Rules of Origin (ROO) is seen as offering some of the most attainable benefits of the agreement. Whilst a workshop on this topic was held in 2021 for officials at the national level of the Ministry of Industry and Commerce (MOIC), Lao PDR, the Capacity Building Programme was pleased to support the co-host’s wish to hold this workshop again but for provincial-level officials. This it did, between 25-29 April, having translated all materials into Lao and with simultaneous translation provided.

The workshop was joined by more than 70 participants from MOIC, the Customs Department, the Department of Import and Export, Foreign Trade Policy Department, Chamber of Commerce, and local business representatives. The workshop was opened by Singaloun VILAYSACK, Deputy Director-General, MOIC, who emphasized the importance of a strong understanding of ROO so government officials are able to share the knowledge with a broader audience, including the business sector. The workshop was also opened with pre-recorded video remarks by Adrian Gilbert, First Secretary, Australian Mission to ASEAN, who conveyed Australia’s support for government officials and other key stakeholders in the implementation of RCEP. He further mentioned how RCEP has created a single, cohesive set of trade rules for the Indo-Pacific and how the agreement will spur economic recovery in the wake of the pandemic.

The five-day workshop focused on 13 modules of the ROO Chapter, delivered in zoom webinar sessions along with individual learning materials. Topics covered included Articles on Originating Goods, Goods Wholly Obtained or Produced along with the PSR Annex. Each module was accompanied by a pre-recorded video module and an online test.

Director-General Saysana SAYAKONE of the Foreign Trade Policy Department of MOIC delivered the closing remarks, reiterating the importance of ROO in accelerating and enhancing the impact on global value chains (GVCs) in the region. He further mentioned the support of more capacity-building trainings on RCEP that will allow more discussion on other areas such as service and e-commerce.

The workshop was hosted by Jeremy Gross, Director of Capacity Building, ERIA and facilitated by Paul Gibbons, former Director Good Section B of the Australian Department of Foreign Affairs and Trade (DFAT), and Wayne Baldwin, an expert previously at the Australian Customs and Border Protection Service (Custom). The workshop was held with support from the Department of Foreign Affairs and Trade, Australia.