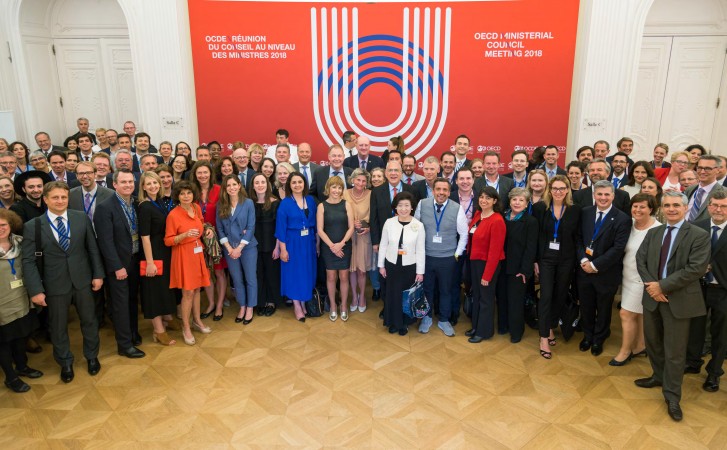 The event focused on the theme ‘What brings us together?’ with the objective of moving from diagnosis to action and shaping solutions to bridge the divides that were discussed at the OECD Forum 2017 which Prof Yamanaka also attended.

Prof Yamanaka addressed the importance of women’s contributions to post-disaster reconstruction, saying ‘Natural disasters occur frequently in Japan as well as in Southeast Asia.  During reconstruction, Japanese women’s resilience contributes to reconstruction by making full use of the characteristics of women such as tolerance, patience and adaptability’.

Regarding women’s empowerment, she said that ‘societies which allow women to choose whether to continue working soon after giving birth or wait and go back to work after the children start school are said to be the most advanced societies. Based on an OECD survey, we need a flexible way of thinking that allows women to contribute to regional and national development while accepting diversity such as countries, regions, ethnic groups and religions.’

On 1 June, Prof Yamanaka attended a Roundtable of Experts at IFRI (French Institute of International Relations) on the theme of ‘Japanese domestic affairs and Japan’s role in Asia’. The experts, officials from Foreign Affairs of France and journalists in charge of Asian and Japan issues also attended.  The Roundtable focused on trade issues such as TPP, economic cooperation between Japan and the EU, Japanese domestic issues such as constitutional reform and how to promote women’s empowerment in Japanese political circles.

On 4 June, Prof Yamanaka took part in the Cambridge Central Asia Forum “North East Asia: Toward the End of Cold War?” at Cambridge University. She mainly talked about North Korea and its changing relations with South Korea, China, Russia, Mongolia and Japan as well as United States.  She also lectured on the relations between Northeast Asia countries, the United States and Japan.