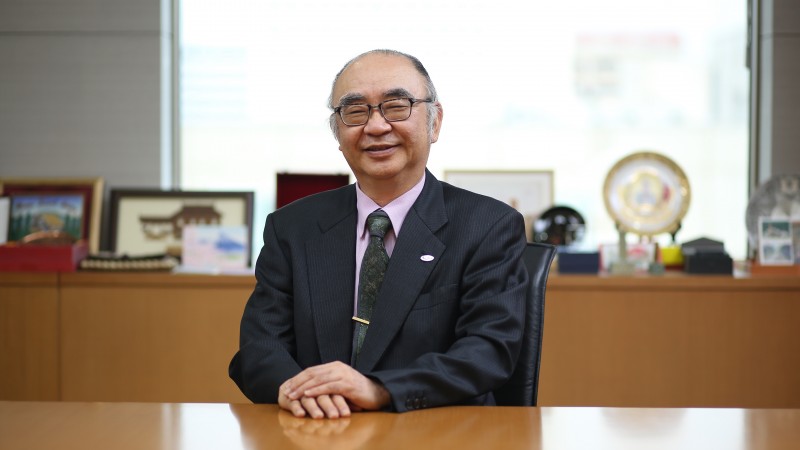 Prof Nishimura, a Yale graduate, has helmed ERIA since its inception in 2008.  His third term comes at the crucial time as ERIA is commemorating its 10th anniversary.

Prof Nishimura emphasised in his opening remarks that ERIA will be key to providing high-quality research and policy recommendations to leaders across East Asia. At the GB meeting last week, ERIA Governors also elected a new chairperson and hosted a consultative meeting with Jakarta-based ambassadors of ERIA member states and dialogue partners.

Prof Nishimura highlighted three objectives which he would like to achieve over the next five years: 1) Further strengthen ERIA’s policy support capacity, and its relationship with the governments of individual member countries; 2) Strengthen ERIA’s academic capacity and academic contribution to the region; 3) Diversify the funding of ERIA.

He also expressed gratitude to the Governors and pledged to fully implement decisions taken by them. The GB meets annually to oversee policies and activities of ERIA. The board is the decision-making body of ERIA and consists of the Secretary General of ASEAN and representatives from each of 16 member countries, comprising academia, business, or former government officials.

Prof Nishimura also outlined ERIA’s plans for celebrating its 10th anniversary. ‘ERIA will hold high-level receptions to celebrate the anniversary in Tokyo in October and in Jakarta in December. Policymakers and diplomats from ERIA member states, researchers, as well as representatives of various international organisations will be invited. ERIA will also host The Asia Think Tank Summit 2018 in collaboration with the Think Tanks and Civil Societies Program at the University of Pennsylvania,’ said Prof Nishimura.

At the meeting, Mr Adrian Cristobal, President of SteelAsia Manufacturing Corp, was elected as the new Chairperson of the Board, replacing Hon Dato Lim Jock Hoi. Furthermore, the President of the Institute of Developing Economies of the Japan External Trade Organization, Dr Kyoji Fukao, was approved by the Governors as a new member of the Academic Advisory Council.

The board members expressed their appreciation for ERIA’s work in 2017 stating that ERIA’s activities have been much strengthened and integrated while at the same time becoming more comprehensive. In this regard, they supported the ERIA’s proposed 2018 work Plan and provided a range of insightful comments to improve research and outreach activities.

During the consultative meeting with the ambassadors, ERIA Chief Economist Prof Fukunari Kimura, Senior Policy Fellow Tan Sri Dr Rebecca Fatima Sta Maria, and Senior Policy Fellow for Energy and Environment Prof Jun Arima briefed the diplomatic corps on ERIA’s future projects as well as on issues related to the international economy, including the future of the Trans Pacific Partnership.

The Economic Research Institute for ASEAN and East Asia (ERIA) is an international organisation based in Jakarta. Since its founding in 2008, ERIA, through its research, supports the regional economic integration process among ASEAN member countries. It works closely with the ASEAN Secretariat, researchers, and research institutes from across East Asia and beyond to provide intellectual and analytical research and policy recommendations on a wide range of topics including trade, energy, sustainability, innovation, digital economy, agriculture and health care.  ERIA was ranked as the 24th best International Economic Think Tank in the world in the 2017 Global Go To Think Tank Index published by the Think Tanks and Civil Societies Program (TTCSP) at the University of Pennsylvania.

Prof Nishimura graduated from the Faculty of Law at the University of Tokyo and obtained a Master's Degree in International Development and Economics from Yale University. He joined the Ministry of International Trade and Industry in 1976. Since then, he has assumed numerous positions, including Representative of the Asia-Pacific Region of the Japan Overseas Development Corporation, Director of the Southeast Asia and Pacific Division of the Trade Policy Bureau, Vice Governor for International Affairs of Ehime Prefecture, Director-General of the Business Support Department of the Small and Medium Enterprises Agency, Executive Managing Director of the Japan-China Economic Association, and President of the Japan-China Northeast Development Association.   Prof Nishimura assumed the position of Executive Director of ERIA in 2008 and subsequently was appointed as ERIA's first President in 2015.  In 2018 he was re-appointed as President of ERIA by the Governing Board for a third five-year term. He is also a Visiting Professor at Waseda University, Japan; Darma Persada University, Indonesia; Honourable Professor at Guangxi University; and Fellow of Musashino Institute of Global Affairs, Musashino University.

Current Members of ERIA's Governing Board