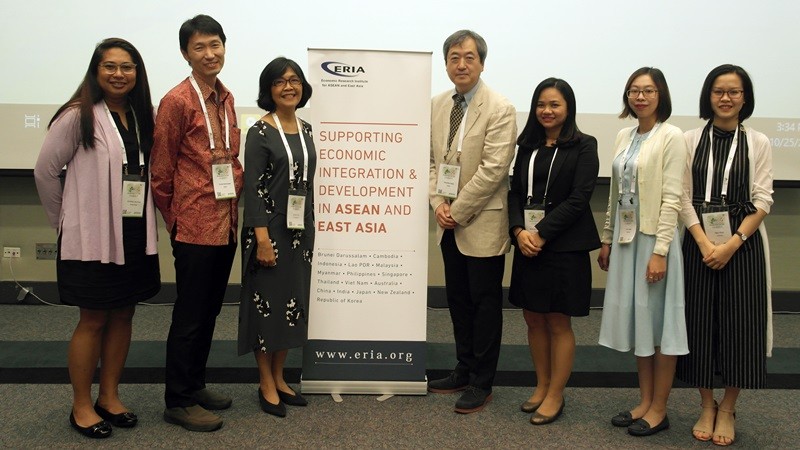 Taipei, 27 October 2019: Members of the ERIA-sponsored Longitudinal Studies for Aging and Health in the Philippines and in Viet Nam presented the outcome of their studies in a symposium held during the 11th International Association of Gerontology and Geriatrics (IAGG) Asia/Oceania Regional (AOR) Congress 2019, held in Taipei on 23–27 October 2019.

The symposium, with the theme Population Ageing in Asian Countries: How Healthy Are Older Adults to be Active in Asia, was held on the third day of the congress, and featured project members Prof Grace Cruz (University of the Philippines Population Institute), Ms Dang Thuy Linh (Institute of Population, Health and Development, Viet Nam), and Dr Sutthida Chuanwan (Institute for Population and Social Research, Mahidol University, Thailand). Prof Yasuhiko Saito from Nihon University, Japan, joined the presentation and discussion as the co-author of three papers. This project was conducted under the auspices of the Asia Health and Wellbeing Initiative (AHWIN) launched by the Government of Japan.

The speakers analysed health expectancy using data collected by the surveys in their countries, including the longitudinal studies. As the studies have just completed the baseline survey, the data of the Philippines and Viet Nam studies are cross-sectional, although they are described as ‘longitudinal’. All the papers compared the results of several cross-sectional studies conducted in the participating countries.

A remarkable result of their analyses is the gender difference of health status, where older women in the three countries have higher proportion of years with disability than men in their remaining lives even though they live longer than men.

Speakers and participants discussed the issues, moderated by Dr Komazawa. All participants agreed on the necessity for in-depth analysis on why compression of morbidity happens or does not happen, as well as on the importance of conducting comparative studies on health expectancy amongst countries. Participants concluded that such efforts in the academe would encourage the involvement of policymakers in the region in improving health expectancy.

IAGG is an academic organisation promoting research on gerontology and geriatrics. Established in 1950, the world congress has been held every 4 years since the 1980s. The Asia/Oceania regional congress is held every 4 years between world congresses. IAGG has a consultative status with the Economic and Social Council of the United Nations. The next IAGG World Congress will be held in Argentina in 2021 while the IAGG-AOR will take place in Japan in 2023.