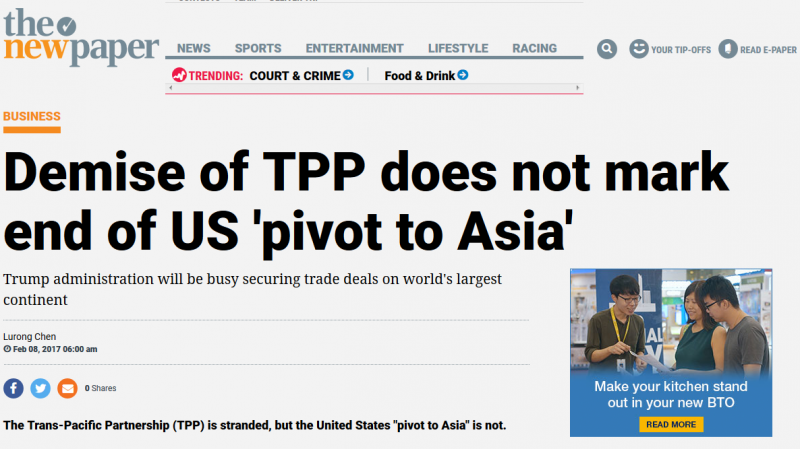 The Trans-Pacific Partnership (TPP) is stranded, but the United States "pivot to Asia" is not.

For the foreseeable future, the Asia-Pacific relationship will remain an American foreign policy priority.

Its abandonment of the TPP is more likely to be a signal that the US will seek better trade deals, than a "lights out" for its involvement in Asia.

The US will stay here, but is likely to ask for a higher appearance fee.

The US and Asia depend on each other. On the one side, Asia is a large market for the US.

It will make much more sense for the US to create jobs and stimulate economic growth through strengthening economic ties with Asia than to move in the opposite direction, towards trade protectionism or isolationism.

Moreover, the US also needs Asia to support its leadership in global governance.

On the other side, Asia's development needs cooperation with the US. This is not only because of the importance of America's advanced technology and its military, political and economic power.

More importantly, it is evident that America's role as an external auditor or even a mentor in promoting other countries' domestic market reform has greatly contributed to the region's transition and facilitated Asia's integration into the global economy.

Its abandonment of the TPP is more likely to be a signal that the US will seek better trade deals, than a 'lights out' for its involvement in Asia.

Even for China, it was the enhancement of Sino-US relations that helped Chinese economic reforms and open-door policy look promising to the world.

Similar motivations may have driven countries like Vietnam and Malaysia to join the TPP.

The TPP was part of the US "pivot to Asia" strategy, but it was just the tip of the iceberg.

To the US, although the plurilateral trade agreement with 11 other countries may not generate as much economic interest as eleven individual US bilateral agreements could do, at least it saved time and created a circle big enough to attract more countries to join.

It was the way the White House showed the US' Asian partners that "the US involvement and leadership in Asia-Pacific institutions (…) can benefit everyone," as Mrs Hillary Clinton, the US secretary of state at the time, stated in 2010.

The idea of "pivot to Asia" was born from a global trend that has (re)oriented the centre of the world's economic gravity to the East.

It may be true that China, the frontrunner, has attracted most of the attention.

China has been increasing its influence by exploring its economic power in Asia over the years.

By contrast, the influence of the US and Japan in the region has been declining, especially after the Bush administration redirected US foreign policy to the overriding concerns of counterterrorism and non-proliferation.

America's disengagement from the region created a space for Asian countries to find their own way to shape the future of the region.

The progress of Asian regionalism reinforced the eastward shift of global power, and the 2008 economic turmoil triggered by the US credit crunch accelerated this process.

Upon sensing the changing landscape of East Asia, the Obama administration acted quickly and announced that the US was back in Asia to become more deeply involved in the region.

President Donald Trump's Asian policy is not clear yet.

But it is sure that the US will still pivot to Asia despite abandoning the TPP.

To prepare for the new challenge, Asean should get ready to move as a group in case the US re-lifts the flag of bilateralism.

This calls for intra-regional institution building as well as pan-Asian collaboration.

Internally, Asean needs a stronger institution that allows the 10 member states to have one voice in talks, which would give them more power in negotiations than they could have in one-to-one talks.

Externally, concluding the RCEP would not only consolidate Asean's role as a functioning centre of Asian regionalism - it would also effectively strengthen Asean's cohesion amongst its member states.