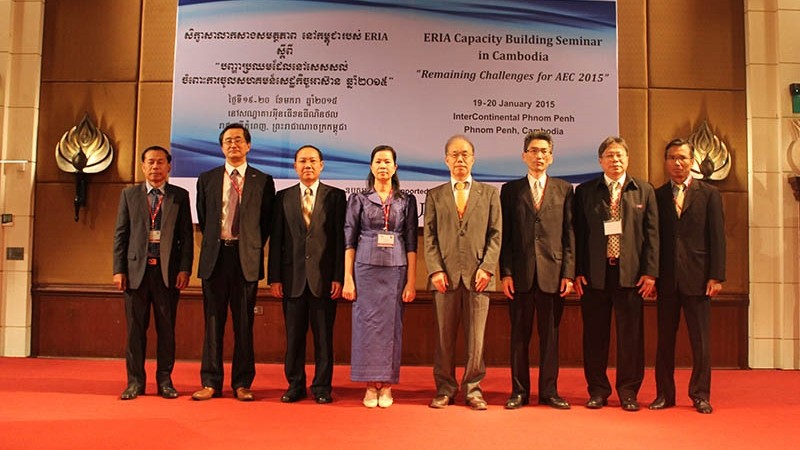 H.E. Dr. Tekreth Kamrang, Secretary of State, Ministry of Commerce, in her welcome remarks said that Cambodia places high priorities in fulfilling the AEC blueprints and looks beyond 2015. "Cambodia also promotes the awareness on AEC 2015 for the general public."

Prof. Yasuhiro Yamada, Special Assistant to Executive Director on CLMV Issues, ERIA, reiterated that Cambodia needs a wider knowledge and moves ahead beyond the AEC 2015. "The Country has to maximize its economic benefits and knowledge," Prof. Yamada said in his opening remarks.

The new ASEAN members--Cambodia, Laos, Myanmar and Vietnam, collectively known as CLMV--have some flexibilities until 2018 to eliminate the import tariff to zero per cent.

He discussed Cambodia's preparedness for the AEC 2015 during the two-day workshop organized by ERIA and Ministry of Commerce.

In explaining Japan's view and perspective on AEC, Mr. Toshiyuki Sakamoto, Deputy Director General for Trade Policy, Ministry of Economy, Trade and Industry, said that Japan and ASEAN are "equal partnership" because of trade balance.

He reiterated that ASEAN is Japan's biggest investment destination in East Asia in 2012. "ASEAN is an important production base ad market for at 7,400 Japanese companies throughout the region. The two-way trade between Japan and ASEAN reached US$250 billion in 2011."

He added that Cambodia has enjoyed the highest increase of Japan's investment at 79.5 per cent in 2013, more than China at 46.5 per cent.

Prof. Fukunari Kimura, Chief Economist of ERIA, pointed out that Cambodia needs to prioritize its development strategies, especially becoming part of the East Asian Production Networks. "Don't be overwhelmed by many things to do such as agriculture, land reform, education, human capital development, corruption, social capita," he said adding that the country must diversify export and improvement human capital.

Cambodia with 14.8-million population joined ASEAN in 1999 to integrate with regional and global economies and attract foreign investment. The membership also enables the country to participate in the global production networks and value chains.

This one and a half day seminar from 19 January to 20 January is part of ERIA Capacity Building Seminar programs on "ASEAN Economic Community". ERIA has been useful for Cambodia in its effort to implement various blueprints under the ASEAN Community, especially in the economic pillar.

Other speakers for the workshop included:

The Seminar was attended by over 80 participants from government official, and Private Sectors.