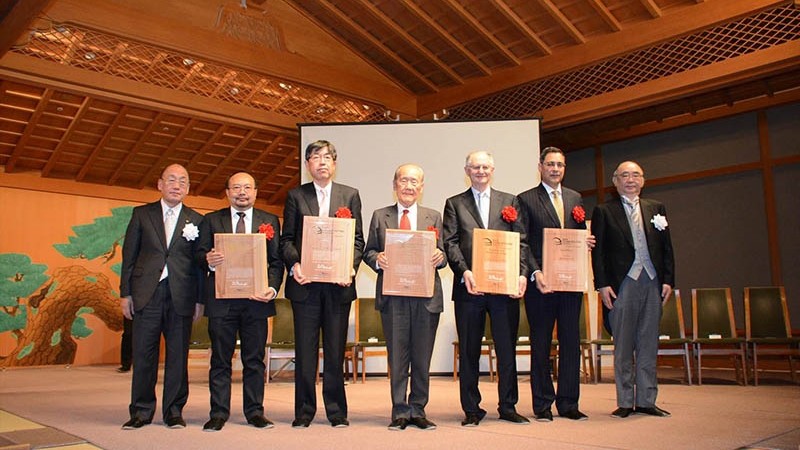 In a video message, Dr Singh said that he receives the prestigious award with 'great gratitude and great humility.' The award cited the former Indian leader's contribution in transforming India's economy and its integration with the broader East Asian economy throughout his tenure. Singh served as the finance minister from 1991-1996 and prime minister from 2004-2014.

'I believe that in coming years, East Asia will grow to its full potential, and become a truly inclusive and cosmopolitan society. I hope that this region will continue to nurture this spirit of growth and integration both within the region and with other parts of the world,' he said.

Professor Drysdale has been writing on the idea of pluralism in Asia and the Pacific including numerous research papers on the region's economic integration and challenges. 'While some may worry what troubles the triumphs of Asia's development may be visiting upon us, I still see an Asia in which Japan, China, Korea, India, Indonesia, Australia and all of its other states can indeed work together cooperatively in securing our collective future in peace and prosperity,' he pointed out.

One of the world's renowned historians, University Professor Wang Gungwu of the National University of Singapore, said in his acceptance speech that in the past half-century, Asia has had a new understanding of national identity while their countries pushed to modernise its economies.

In praising the central role played by ASEAN, he emphasized that ASEAN has overcome numerous obstacles to build a commitment to cooperation and connectivity in a region where there are many different traditions. 'Its success comes from a unique sense of the cosmopolitan, one that has been defined by the innovative ways the region's leaders have chosen to build their futures together. It is a cosmopolitan outlook that I hope this award will promote,' he added.

In accepting the Cultural Prize, Mr Rithy Panh, a Cambodian Filmmaker, stressed that the reconstruction and development of a country or region have to have a solid cultural foundation and identity. 'I cannot imagine sustainable economic development without tangible cultural development. This is the issue of our existence in this new century,' he said.

Mr Rithy's work focused on his country's past horrible experiences and common efforts to rebuild the nation. 'We must ensure the rights of the weakest. This place we build to live together .... this house of peace.... is called Culture,' he concluded.

In Japan, the Takarazuka Revue Company has become the symbol of Japan's stage performance. This all-female revue troupe has shown and proven the deep potentials that women are capable of pursuing as they played very convincingly numerous roles, including those meant for men. In so doing, they have inspired dreams and excitement for women. 'The Takarazuka will continue its performance and contribute to the community-building in Asia. I invite all of you to come and see,' said Mr Koichi Kobayashi, President, Takarazuka Revue Company in his acceptance speech.

A total of 350 participants attended the award ceremony which was organised by ERIA and Nara Prefecture. The 1st Asia Cosmopolitan Awards was held on 18 December 2012 in Nara, Japan.