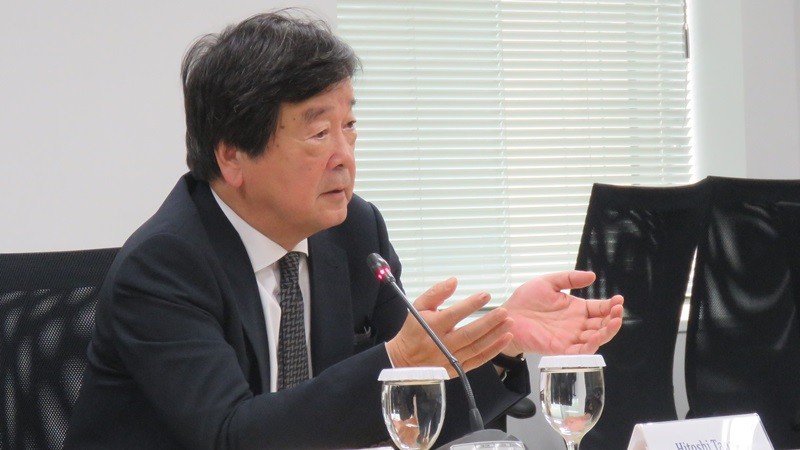 ERIA hosted an informal roundtable discussion with the Former Deputy Minister of Foreign Affairs of Japan Mr Hitoshi Tanaka on various issues related to the current and present issues of ASEAN and Indonesian economy, especially in relation to Japan, the trend of economic nationalism, and the ASEAN Economic Community 2025.

ERIA President Prof Hidetoshi Nishimura delivered the opening remarks, in which he gave an overview of ERIA's historical background. Mr Tanaka congratulated Prof Nishimura on his efforts to build ERIA and praised the great contributions that ERIA has made to the development of ASEAN and East Asia. He went on to introduce himself to the audience and briefly touched upon the subjects that he wanted to discuss, including the shift in world order and how it will impact ASEAN and East Asia.

According to Mr Tanaka, who is also the Chairman of the Institute for International Strategy, Japan Research Institute, Asia is witnessing a declining Japan, a stronger China, a growing India, and an unpredictable United States. The challenge that Asia faces is to create a solid architecture in East Asia in this context. He stated that economic integration is crucial, and ERIA has a lot to contribute to this via its research.

During the discussion session, Ambassador Lee stated that it would be desirable to quickly conclude the Regional Comprehensive Economic Partnership (RCEP) agreement. Mr Tanaka concurred, adding a suggestion to bridge RCEP with the Trans-Pacific Partnership (TPP) agreement--which is now TPP 11 with only 11 countries in the negotiation.

When discussing the shifting world order, Mr Tanaka stated that in the future, China's strength and share in power will grow. There is a necessity to hedge against China's unpredictability, which can only be done by the US; therefore, it is necessary for Japan to engage with the US constructively. Japan Prime Minister H.E. Shinzo Abe has been trying to cultivate a good relationship with the US President H.E. Donald Trump. That said, Mr Tanaka believed that the way ahead required regional cooperation instead of bilateral cooperation.