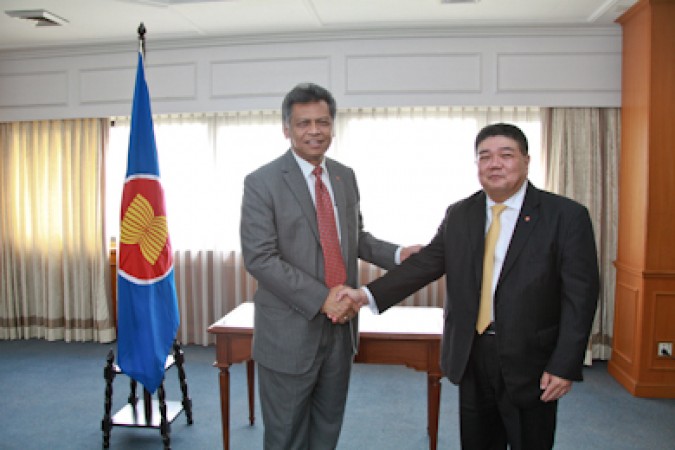 H.E. Dr. Lim Hong Hin, former ERIA economist was appointed as the new Deputy Secretary-General (DSG) for ASEAN Economic Community (AEC) for the period of 2012 to 2015 at the ASEAN Secretariat. The oath-taking ceremony was witnessed by the Secretary-General of ASEAN Dr. Surin Pitsuwan, all Deputy Secretaries-General of ASEAN, and officers of the ASEAN Secretariat.

Guided by the ASEAN Charter, Dr. Lim will support the Secretary-General by providing leadership in the implementation of the AEC Blueprint and by managing the AEC Department. He will also provide strategic advice to support ASEAN Member States' effort to transform ASEAN into a region with free movement of goods, services, investment, skilled labour, and freer flow of capital.

Dr. Lim was appointed by the ASEAN Coordinating Council to succeed H.E. Pushpanathan S. Prior to this appointment, Dr. Lim was with the Economic Research Institute for ASEAN and East Asia (ERIA) from 2010-2012. ERIA was established by the East Asia Summit, to provide policy analyses and recommendations to facilitate the regional integration process in East Asia and ASEAN. The works carried out by ERIA for this purpose include the Master Plan on ASEAN Connectivity, the Enhancement of AEC Scorecard, and the Midterm Review of the Implementation of AEC Blueprint.

From 2002 to 2009, Dr. Lim served at the Brunei Economic Development Board, Prime Minister's Office, where he was responsible for attracting, retaining, and adding value to foreign direct investment to diversify Brunei Darussalam's economy to create new opportunities for Small and Medium Enterprises (SMEs) and local people.

A graduate of the University of Reading, University of Hull, University of Western Australia and The London School of Economics and Political Science, H.E. Lim specialises in business administration, cybernetics, information technology, and management.

As stated in the ASEAN Charter, the Secretary-General of ASEAN shall be assisted by four Deputy Secretaries-General, of different nationalities from the Secretary-General and shall come from four different ASEAN Member States. Two DSGs are nominated by Member States on a rotational basis for a non-renewable term of three years while two DSGs are openly-recruited based on merit for a three-year term which may be renewed for another three years.