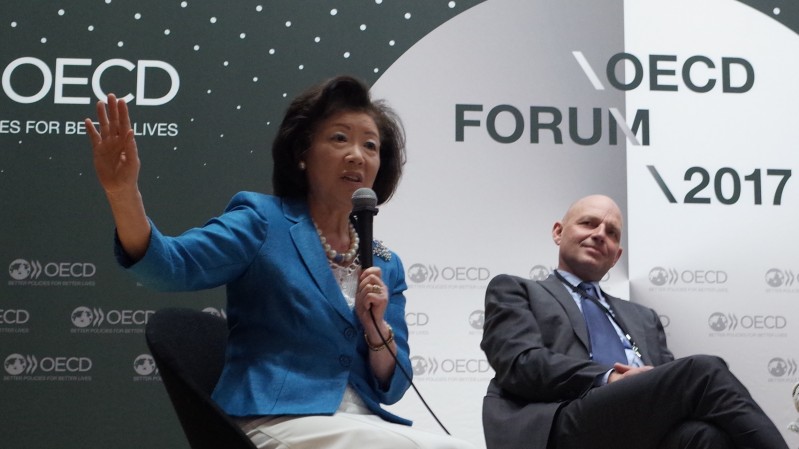 Prof Akiko Yamanaka, Special Advisor to the President of the Economic Research Institute for ASEAN and East Asia (ERIA) attended the OECD Forum 2017 held in Paris on 6 to 7 June 2017, where she speaks in a panel discussion Bridging Divides: Unconscious Gender Bias.

The scene for the panel session, which discussed unconscious gender biases that are present everywhere from government ministries to children's toys, was set by HRH Crown Princess Mary of Denmark. Annette Young, the host of The 51% on France 24 Television, a show about women issues from around the world, moderated the session.

Prof Yamanaka talked about the forms of resilience that has been growing from the culture and history of women's lives in Japan. She highlighted the fact that women always struggle with natural disasters or man-made disasters, and women's power always contributes to the reconstruction phase in the aftermath of disasters with a tenacious spirit, called 'resilience'.

She also pointed out about cultural sensitivity, saying that 'Equality does not mean you do the same things. We must recognise that region, history, culture, and geographical condition in each country affect and change the meaning of equality. That is why balance is very important - not just at the national level, the global level, but also personal level.'

'I believe it is important to recognise that the 21st century is the age of balance. The struggle for balance is being waged on an international level. We have to cooperate and work together for assistance in providing education, life lines, and even infrastructure support that is required simply from the human security point of view, regardless of any difference in race, religion, color of skin, or nationality,' she concluded.

During her stay in Europe, she also gave a lecture at Cambridge University entitled 'Japan and North-East Asia: Toward More Stable and Peaceful Region' and had several meetings with important dignitaries.