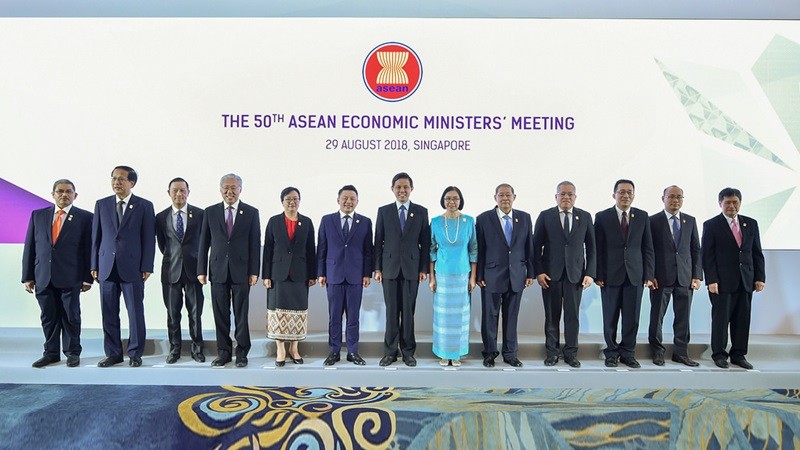 ERIA was honoured to be invited to present a discussion paper titled ‘Regional Economic Integration: Managing the Challenges of Emerging Trade and Investment Issues’.

The Discussion Paper focused on how to manage three key challenges the region is facing:

And then offering three areas for consideration by the Ministers:

‘The Ministers congratulated the Economic Research Institute for ASEAN and East Asia (ERIA) on its 10th Anniversary and welcomed the report of the 11th ERIA Governing Board Meeting. The Ministers commended ERIA’s contribution, as a regional think-tank, in supporting regional integration through its research activities, and encouraged ERIA to continue providing targeted high-quality research on topics that highlight and address the challenges facing the region.’

The JMS concluded with the following statement:

The Ministers recognised the importance of ongoing work to maximise the opportunities of, and address the challenges presented by, the digital economy and the rise of regional and global value chains, as part of their efforts to promote economic growth and integration in the region.

Also on 1 September, ERIA participated in the Seventh AEM-Canada Consultations to present the results of a Joint Feasibility Study on the proposed FTA which indicated that both ASEAN and Canada will benefit from the Agreement.

First, compared to complete tariff elimination between ASEAN and Canada, there are larger potential gains through NTM reduction, trade facilitation improvement, and service and investment liberalization.

Second, the reduction of NTMs and the improvement of trade facilitation resulting from the potential FTA can benefit ASEAN and Canada not only from promoting bilateral trade and investment, but also from improving connections with their third-party trading partners via ‘spill-over’ effects.

Third, in addition to its impacts on ASEAN's external trade, the potential agreement will have positive impacts on intra-ASEAN trade as well, in particular trade between non-CPTPP and CPTPP ASEAN member states.

The Joint Media Statement for the consultation referred to the Joint Feasibility Study:

‘3. The Ministers welcomed the completion of the Joint Feasibility Study for an ASEAN-Canada FTA, which was jointly conducted by the Economic Research Institute for ASEAN and East Asia (ERIA) on ASEAN’s behalf and Global Affairs Canada. The study showed potential gains for ASEAN and Canada from an FTA, with positive impact on trade and investment flows. In this context, the Ministers also welcomed the outcomes of the first set of Exploratory Discussions for a possible ASEAN-Canada FTA, covering the areas of trade in goods, investment, and services, which provided ASEAN and Canada the opportunity to gain a better understanding of each other’s approaches to these areas in an FTA. The Ministers agreed that more dialogue is needed at the experts’ level to enhance mutual understand on a range of FTA areas and directed officials to intensify discussions with a view to completing exploratory discussions in 2019.’

The JMS also mentioned the ‘ASEAN SME Policy Index 2018’ which was produced by ERIA in collaboration with the OECD.

‘5. The Ministers expressed their appreciation for Canada’s ongoing support to ASEAN’s efforts to promote inclusive and innovation-led growth through technical assistance. The Ministers noted various initiatives being supported by Canada in collaboration with relevant ASEAN sectoral bodies. The Ministers particularly welcomed the launch of the report ‘ASEAN SME Policy Index 2018’ in Singapore on the side-lines of the fiftieth ASEAN Economic Ministers Meeting, which maps and benchmarks SME development policies across ASEAN and provides a set of policy recommendations based on good practice experience in the region as well as in OECD countries with an aim to support the MSME development in ASEAN, and thanked Canada for its support.’

6. The Ministers noted the progress in the preparation of the Report of ERIA-RFTA Joint Seminar held on 19 December, 2017 in Moscow.