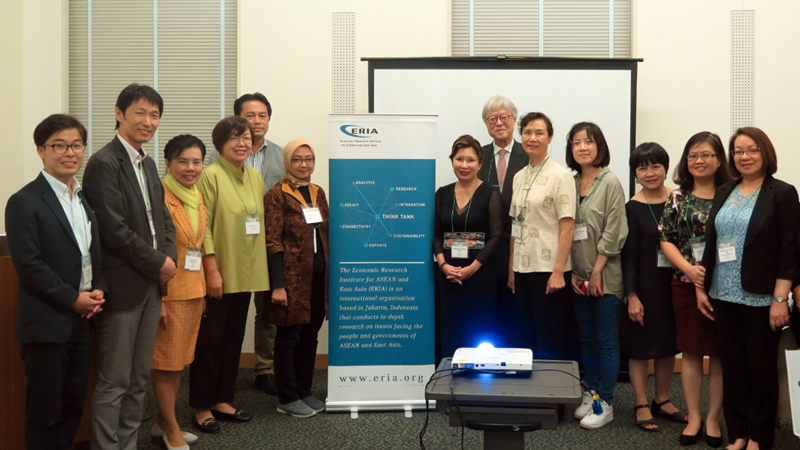 Dr Osuke Komazawa, Special Advisor to the President for Healthcare and Long-term Care Policy, delivered the opening remarks before the commencement of the first session. On behalf of ERIA, Dr Komazawa welcomed all the participants in the venue with the gratitude to their support and explained what would be discussed in the two sessions. He also talked about Asia Health and Wellbeing Initiative or AHWIN, which was launched in 2017 by the Government of Japan and brought the chance for ERIA to expand its activities to the discussions on population ageing and long-term care.

Prof Koichi Ogasawara of Tohoku Fukushi University of Japan, Professor Emeritus of Saitama University, moderated the first session, ‘National policies, systems, and practices of long-term care in Asia’. He summarised Asia’s challenges on population ageing, considering the fact that Asia is the ‘world’s centre of ageing in terms of its speed and the number of older people’. He also talked about the institutionalisation process of Japan’s long-term care (J-LTC), concepts and tools of J-LTC, and the service provision system of J-LTC insurance.

Prof Ogasawara’s introductory presentation was followed by the five other panelists from the Republic of Korea, China, Singapore, Viet Nam and Thailand. The panellists were requested to talk about the policy response to increasing long-term care needs in an ageing population, institutional structures of care service provision systems, and policy consideration on the use of family-public-market resources of each country.

The last panellist, Dr Puangpen Chanprasert, from Department of Health, Ministry of Public Health of Thailand, provided an explanation about the development of long-term care policy in Thailand, and the service provision system of long-term care depending on the level of administrative agencies from local to central government. She also talked about some pilot projects of long-term care and the budget allocation from National Health Security Office to long-term care services.

The second session, which was moderated by Dr Wako Asato from Kyoto University, entitled ‘Long-term care workforce in the era of population ageing – towards sustainable mobility of long-term care workforce’. Dr Asato began by  explaining the aim of the session, followed by the estimate of foreign domestic workers in East Asia, several migration channels in elderly care to Japan, and the obstacles to making long-term care seen as a viable career choice. This session had four panellists from Japan, Indonesia, the Philippines, and Viet Nam.

Prof Noriko Tsukada, from Nihon University, Japan, presented the outcomes of her study where she interviewed the administrators of care facilities in Japan which accepted foreign caregiver candidates under the Economic Partnership Agreements (EPA) between Japan and Indonesia or the Philippines. The study revealed that the foreign candidates performed well overall in terms of language skills and their care practices in spite of a lot of difficulties raised by the administrators. She also briefed the recent expansion of visa status for foreign care workers; however, she emphasised that it’s just one of the measures by which Japan overcomes the shortage of care workforce. Prof Shelley Dela Vega, College of Medicine, University of the Philippines, stated that the Philippines is one of the major sources of domestic care and health care workers and raised the issues in relation to the Philippines’ condition as a sending country. The country’s lack of education of care for people with dementia was among of the issues raised. She offered suggestions to improve the curriculum of healthcare professionals and caregiver training courses with the inclusion of geriatrics and gerontology focusing on community-based care and to strengthen the regional cooperation to achieve mutual recognition agreements (MRAs) on nursing.

Ms Susiana Nugraha, Vice Chairperson of the Center for Ageing and Family Studies, University of Respati Indonesia, talked about the policies and practical procedures of Indonesian overseas workers deployment. She also talked about the EPAs between Indonesia and Japan, under which Japan accepts Indonesian candidates of registered nurses and certified care workers. She pointed out some facts, such as the low passing rates of the national examination of EPA candidates and the cost to be shouldered by the candidates, and completed her presentation with the emphasis on creating a win-win relationship through capacity development.

Dr Khuat Thu Hong, the Director of Institute of Social Development Studies of Viet Nam, explained the structure of the programmes sending care workers to several advanced economies including Japan and Germany. She also talked about the challenges of overseas care worker programme, such as language proficiency, living cost abroad, or the fact that care work is not attractive to many people. Finally, she highlighted the importance of strengthening the legal framework of emigration to avoid illegal brokerage and to protect overseas workers.

After the two sessions, all participants agreed that they would submit papers for the compilation of the proceedings. They set the target time of the publication at the end of this year.

Note: *World Social Science Forum (WSSF) is a forum to gather researchers, policymakers, funders, and other stakeholders to discuss significant issues related to social science globally and determine future priorities for international social science. The theme of WSSF 2018 is ‘Security and Equality for Sustainable Futures’.