ERIA-OECD Seminar on "Regional Integration in ASEAN and East Asia" 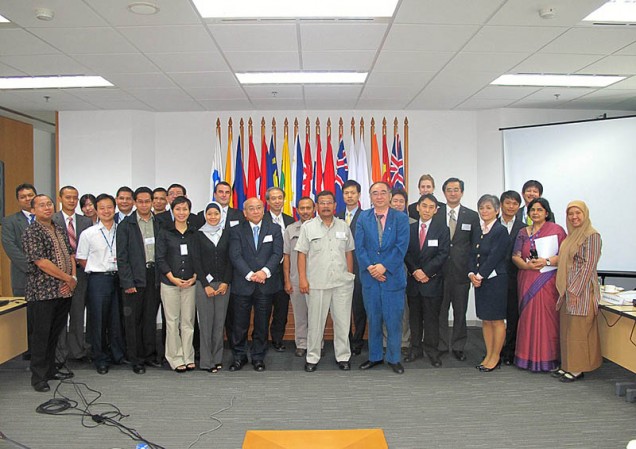 The ERIA and the OECD organised a joint seminar on "Regional Integration in ASEAN and East Asia" in Jakarta on 31 January 2011.

The seminar provided an important opportunity to review the results of the ERIA-OECD collaborative project for 2009-2010 and discuss ways forward to developing comprehensive Asian regional integration indicators and providing policy recommendations for further integration in ASEAN and East Asia.

The seminar was opened by Mr. Hidetoshi Nishimura, Executive Director, ERIA and Mr. Kiichiro Fukasaku, Head of Regional Desks, OECD Development Centre. The seminar was attended by about 35 participants, including Dr. Rizal Affandi Lukman, Vice Minister of Indonesia's Coordinating Ministry for Economic Affairs and officials from Indonesia's Ministries of Finance, Industry and Trade and BAPPENAS; representatives from Embassies of Australia, Cambodia, China, India, Japan, Malaysia and Thailand as well as the ASEAN Secretariat and the World Bank; and those from the private sector.

This note presents a brief summary of the background of this project and the main results of two research papers presented at the joint seminar.

The ERIA-OECD collaborative project began in April 2009 for two years with a view to developing a monitoring tool for the integration process of ASEAN and East Asia. The ERIA appointed Dr. Ponciano Intal Jr. as a coordinator for this collaborative project, and after initial discussions between the two institutions, it was agreed upon to focus substantive work on the following two areas: (1) regional integration and business cycle synchronization, and (2) regional integration and production structure.

The construction of comprehensive regional integration indicators requires a large amount of data and information covering different areas of the economy. For instance, concerning macroeconomic integration, we thought it would be imperative to construct business cycle indicators for Asian countries by using the common OECD methodology. We also recognised that the ERIA had already examined integration in other areas, for instance, investment and trade. Therefore, we intended to seek synergies in this collaborative project by exploiting the comparative advantage of each organisation and creating several indicators necessary to monitor the integration process.

We have developed the Asian Business Cycle Indicators (ABCIs) jointly with the OECD Statistics Directorate. Indicators for five ASEAN countries (Indonesia, Malaysia, the Philippines, Singapore and Thailand) as well as China and India have already become operational (see www.oecd.org/dev/abcis). Both leading and coincident indicators allow us to monitor the near-term economic prospects for Asia in 5-6 months ahead. These indicators serve as a tool for regional monitoring and tracing Asia's business cycle synchronisation. Preliminary analysis indicates that while ASEAN business cycles have continued to be affected by the import demand from OECD countries, China is indeed leading ASEAN recoveries through trade linkages.

Recent macroeconomic challenges include large capital inflows and food price hikes. In this context the author discussed the importance of greater exchange-rate flexibility and macroeconomic co-operation. In particular, strengthening regional cooperation through monitoring and surveillance was emphasised in his presentation. Furthermore, the author argues that governments in the region need to strengthen their fiscal policy frameworks in order to meet the challenge of "rebalancing growth" in the medium term. Given the huge financial demand for infrastructure development, setting appropriate fiscal rules would be important to maintain strong medium-term growth targets without jeopardising fiscal health. Finally this paper addresses the role of independent fiscal institutions and medium-term budgetary frameworks.

Comments and questions on Tanaka's presentation

1. Several questions were raised regarding the selection of leading and coincident indicators including agriculture-related variables. The author explained the current OECD methodology and the possibility of considering other variables in revising these indicators.

2. The question of comparing business cycles between OECD and Asian countries was raised; for instance, whether these two groups of economies have been "decoupled" from each other's business cycles. ABCIs share the same methodology as OECD Composite Leading Indicators (CLIs); both take the "growth cycle" approach and the results are comparable. The author replied that looking at the long time-series data, "decoupling" was still not visible.

3. The use of ABCIs for policy making was discussed extensively during the seminar. In conclusion, Dr. Rizal urged both ERIA and OECD to make an effective use of these indicators for several ministries, including the Coordinating Ministry.

4. Overall, the macroeconomic challenges addressed in this paper were widely shared with the participants.

Evolution of Production Network in the Asia - Pacific and Rest of the World:

The Asian trade network is increasingly fragmented, resulting in higher dependence on supplies of goods and services from neighbouring countries. The OECD's internationally-harmonized Input-Output and Bilateral Trade Databases include 47 countries accounting for more than 90% of global GDP. These databases allow us to examine the recent evolution of international trade networks involving Asian-Pacific countries at 2-digit industry level (see www.oecd.org/sti/inputoutput). Using these databases, we have developed inter-country, inter-industry model to estimate globalisation and fragmentation indicators. This study highlights major changes in the pattern of Asia's trade in intermediate goods and services since the mid-1990s, including among others,

Comments and questions on Yamano's presentation

1.  There was wide recognition among seminar participants that the analysis using input-output and bilateral trade databases was most useful to understand the sectoral structures of economies and their changes over time: how the output and GDP are induced by final consumption at the sectoral level. But at the same time, the question of whether or not I-O based "offshore" indicators would represent production fragmentation per se. This is because the aggregated indicators at the industry level may not represent the activities of enterprises. Other comments (such as those raised by Prof. Fukunari Kimura, ERIA Chief Economist) indicated that I-O based indicators would have their own limitation in addressing issues related to industrial agglomeration.

2.  There was the question of how best to update I-O analysis. The author replied that it would be possible to combine the latest trade coefficients (2009) with the 2005 inter-industry structure.

3.  Some participant raised the question of how service linkages were included in the inter-country production model. The author answered that he used both OECD and UN services trade statistics and that the available categories were financial services, tourism and business services.

4.  There was also the question of how price changes could be analysed. The author replied that unit price analysis to better understand comparative advantage would be possible. However the interpretation would be limited.