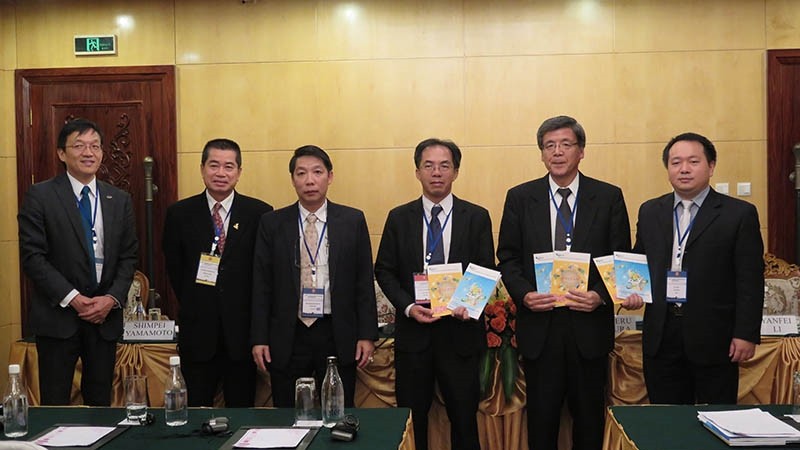 On the sidelines of the 32nd ASEAN Ministers on Energy Meeting (AMEM) and the 8th East Asia Summit-Energy Ministers Meeting (EAS-EMM) held in Vientiane, Lao PDR on 23-24 September 2014, the Economic Research Institute for ASEAN and East Asia (ERIA) launched two books dealing with energy issues of strategic significance to the ASEAN and East Asia region.

The two books are: (1) Energy Outlook and Analysis of Energy Saving Potential in East Asia, and (2) Investing in Power Grid Interconnections in East Asia.The two are among a number of energy research projects undertaken by ERIA in FY 2013-2014 in response to the tasks given by the EAS-EMM.

During the book launch attended by members of the press corps from Lao PDR and Thailand, Special Advisor to ERIA Executive Director on Energy Affairs, Mr. Shigeru Kimura, and ERIA Energy Economist, Dr. Yanfei Li, presented the key points and policy implications of the two reports.

According to Mr. Kimura, the Energy Outlookreport is the only energy outlook study that covers 16 EAS countries. It examines two energy outlook scenarios, namely, the Business-as-Usual (BAU) scenario which reflects each of the 16 East Asian countries' existing energy policy, and the Alternative Policy Scenario (APS) which includes additional energy saving goals and action plans currently under consideration in each country. The study focuses on an analysis of the additional energy saving that could be achieved by implementing action plans in each country that are over and beyond those in the BAU scenario. Key results of the report indicate that in the APS case, the increase in final energy consumption by 2035 is projected to be 11.4 percent less than in the BAU scenario. And in terms of CO2emissions, the APS case projects a significant level of reduction (by 24.9%) vis-�-vis the BAU case in 2035.However, albeit said reduction, the CO2 emission in 2035 will still be above the 2010 level and far above the 1990 level, and will not be enough to mitigate the negative impacts of climate change.

Responding to questions on how the books'recommendations can be useful to Lao PDR and the other ASEAN countries, Mr. Kimura said that the energy outlook study notes the need for more policies and action plans on energy saving measures in each country in order to improve the level of energy saving and of reduction of CO2in both the individual countries and the region as a whole. The study's recommendations can therefore provide guidance to policymakers and planners in drawing up more detailed action plans in this respect. Dr. Li, on the other hand, noted that since the power grid study develops a tool for integrated regional planning and looks closely into implementation aspects, it can thus help policymakers identify possible barriers to implementation and formulate strategies on how to address such barriers.

Both speakers also affirmed the importance of having key stakeholders, especially the media, participate in the promotion of energy efficiency measures and plans through appropriate information campaigns.