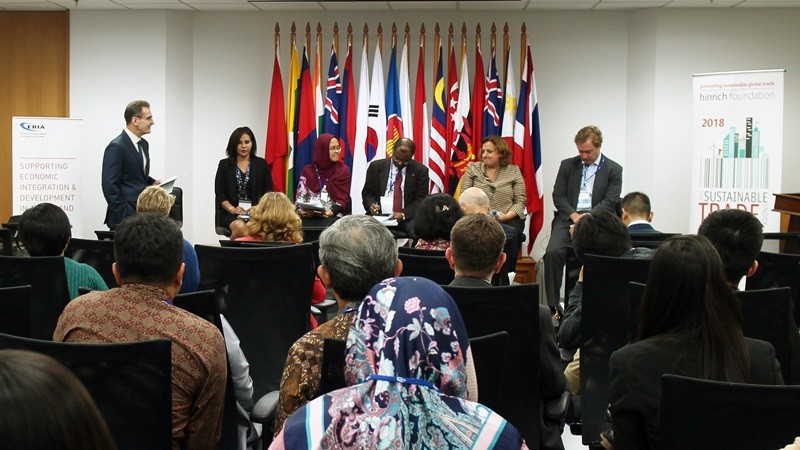 Jakarta, 11 July 2018: The Hinrich Foundation released the key findings from the second edition of its Sustainable Trade Index at an event hosted by the Economic Research Institute for ASEAN and East Asia (ERIA) in Jakarta on 11 July.

The Sustainable Trade Index was devised by the Economist Intelligence Unit (EIU), commissioned by the Hinrich Foundation. The team evaluated 19 Asian countries and the United States on their aptitude to trade in the international system. Representatives from the International Finance Corporation (IFC), the ASEAN Secretariat, and ERIA, as well as other senior economists and representatives from the Indonesian government, media, and private sector, attended the launch and participated in a discussion on global sustainable trade.

The Sustainable Trade Index findings are extremely important, given escalating tensions on the international trade scene and changing trends on foreign investment. The Index finds that Asian countries, particularly the richer ones, are regressing in terms of their trade sustainability on three pillars – social, environmental, and economic. While the overall performance of most countries declined, small gains were made on different indicators. For example, Indonesia ranked 14th – the same as in the 2016 index – but made gains on the social pillar.

The event was proudly hosted by ERIA as part of the activities organised by the Government of Indonesia, the IMF, and the World Bank Group as the groundwork for the IMF-World Bank Group Annual Meetings which will be held in Bali in October 2018. ERIA hopes to host more productive conversations like this one in the future and welcomes further discussion on the important topic of trade sustainability.

To see the results of the 2018 Edition of the Sustainable Trade Index, visit the Hinrich Foundation website at http://hinrichfoundation.com/trade-research/sustainable-trade-index/