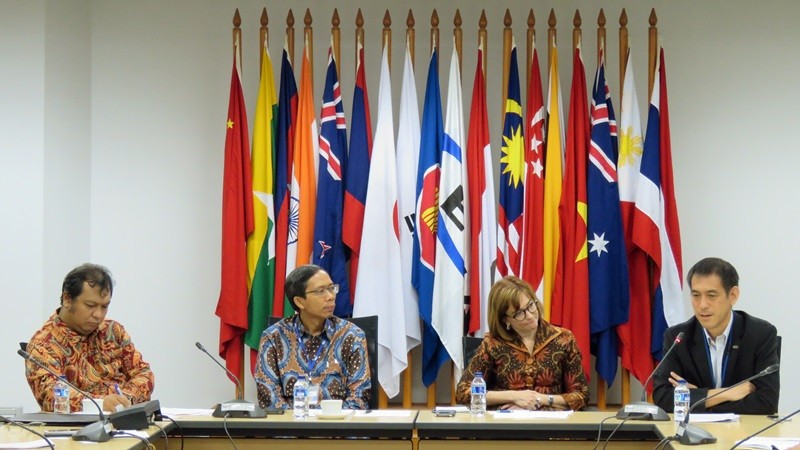 Jakarta, 28 January 2019: Think tanks are essential in providing evidence-based research for policymaking activities, especially in an era when global trends show an erosion of global democratic values, commitment to human rights, and policymaking, as discussed in ‘Why Facts and Think Tank Matters Roundtable 2019’ held by the Economic Research Institute for ASEAN and East Asia (ERIA) in Jakarta on 28 January 2019.

The discussion this year is conducted under the theme ‘Bridging the Gap Between Research and Policy: The Role of Think Tanks in Southeast Asia’ and moderated by ERIA’s Senior Economist Dr Dionisius Narjoko. This annual event is held in conjunction with the release of the 2018 Global go To Think Tank Report scheduled for 31 January 2019. The Think Tanks and Civil Societies Program (TTCSP) at the University of Pennsylvania spearheads the Global Go To Think Tank Report and the Why Think Tanks Matter events annually. This year, the latter event will be hosted by think tanks in 150 cities around the world.

‘In my opinion, think tanks are very important. My ministry depends on the result of think tanks. Many international trade cooperation and bilateral cooperation are based on the research results, including cooperation with the EU, Australia, or Indonesia-Japan Comprehensive Economic Partnership Agreement. They are the result of the collaboration between think tanks and the government,’ said Dr Ir Kasan Muhri, MM, the Head of Trade Analysis and Development Agency of the Ministry of Trade Republic of Indonesia, one of the panellists in today’s discussion.

His fellow panellist Dr Robin Bush, the Regional Office Director for Asia from RTI International, also shared the same perspective as Dr Muhri, adding that think tanks are also important for a country’s growth and transformation from agriculture-based to knowledge-based.

‘Even in Indonesia, we see a commitment to the importance of think tanks and knowledge data, for example within the ministries there is an entire department that is well-funded and well-staffed,’ said Dr Bush.

‘Regarding the communication with policymaker, it is very important to have interaction before we come with policy agenda. Also, they can suggest us how we should formulate the study agenda. Most of the time we think about other academics, there is very small possibility that the needs of policymakers and the needs of researchers are the same. It’s not easy for people to do,’ said ERIA’s Chief Operating Officer Izuru Kobayashi.

In order to help new think tanks to break into the network of policymakers, Dr Bush suggested mapping the policymakers to learn about their interests.