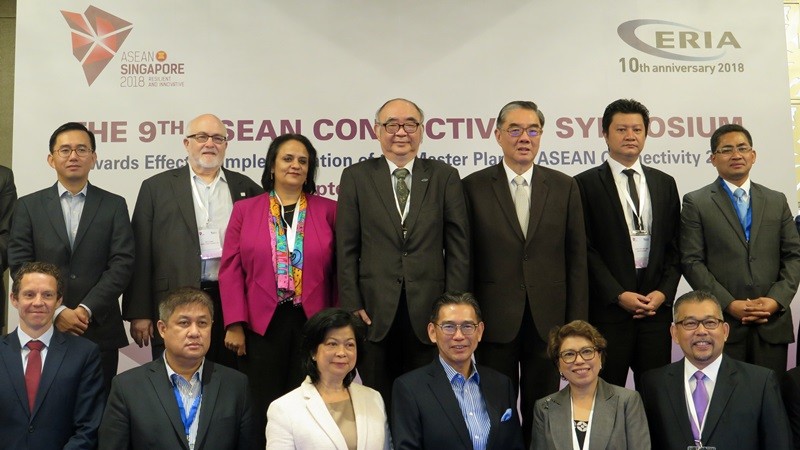 Singapore, 6 September 2018: President of ERIA Prof Hidetoshi Nishimura noted in his opening remarks at the 9th ASEAN Connectivity Symposium that the Comprehensive Asia Development Plan, with its focus on soft and hard infrastructure, was developed as a recovery plan following the global financial crisis of 2008. Nearly a decade later, physical connectivity remains important but, ‘digital connectivity and upgrading the soft side of connectivity infrastructure are becoming increasingly important’.

The Symposium, with the theme ‘Towards Effective Implementation of the Master Plan on ASEAN Connectivity 2025’, was held on 6 September at the Mandarin Orchard Hotel, Singapore. It was organised by the Government of Singapore, co-hosted with the ASEAN Secretariat and ERIA.

Attended by around 150 participants, including Chairs of the ASEAN Connectivity Coordinating Committee, Dialogue Partners, Sectoral Body Chairs, leaders from the private sector, academia, and international organisations, the day’s proceedings were divided into four sessions around the themes: Implementation of the Master Plan of ASEAN Connectivity, Mobilizing Resources for Infrastructure Projects in ASEAN, Connecting the Cities in ASEAN, and Empowering ASEAN MSMEs in the Digital Economy. These themes were chosen as seamless connectivity is seen as the key to unlock the potential gains of the digital economy through ensuring a smooth flow of information, seamless logistics, and the free flow of capital.

In the opening panel, Mr Lim Chze Cheen, Director of the ASEAN Connectivity Division of the ASEAN Secretariat, gave an update of progress concerning connectivity within ASEAN. He noted that the essence of connectivity includes efficiency, inclusivity, and transparency, with the challenge of translating vision to reality.

For Tan Sri Datuk Dr Rebecca Fatima Sta Maria, Senior Policy Fellow at ERIA, 'connectivity is at the ground level where people feel it on the skin', and, 'it is about the mind and symbols, and how we think about ASEAN.' Some practical examples include the ASEAN Universities Network and an Open Skies policy.

Mr Chris Humphrey, Executive Director of the EU-ASEAN Business Council also brought up the issue of Open Skies, which he believed would make a significant difference in ASEAN. He also focused on the challenge of mobilising funds to support the development of physical infrastructure as well as issues around non-tariff barriers in the region.

Former Secretary-General of ASEAN, Ambassador Ong Keng Yong, still sees insufficient engagement within ASEAN, with people not knowing how best to use ASEAN, and regulators unable to work with a regional perspective. Problems are exacerbated by constant changes in the political and bureaucratic leadership, as well as an increasing focus on security concerns.

In summing up after in-depth discussions throughout the day, Ambassador Tan Hung Seng, Chair of the ASEAN Connectivity Coordinating Committee and Singapore’s Permanent Representative to ASEAN, noted that connectivity is a work in progress constituting many components. Furthermore, he said that achieving connectivity is a long-term, complex and cross-cutting objective that will require both engagement with the private sector as well as the citizens of the region to ensure a people-centred and people-oriented ASEAN.