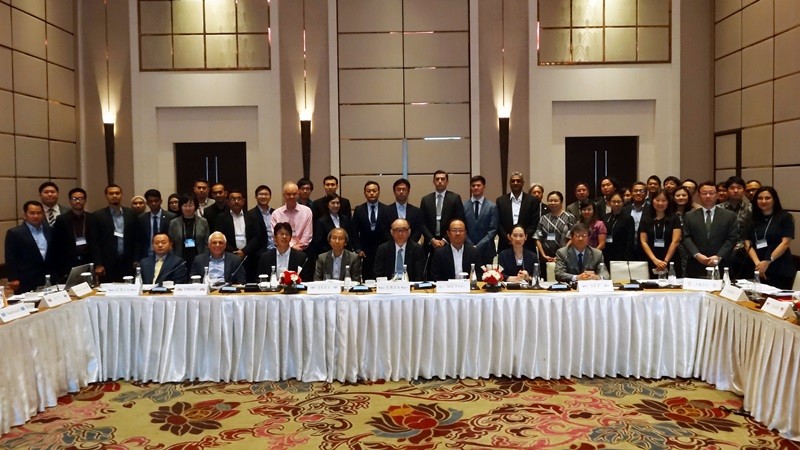 Jakarta, 9 July 2018:  the Economic Research Institute for ASEAN and East Asia (ERIA) held a workshop on ‘LNG Market Development in Asia’ at the Fairmont Hotel in Jakarta, Indonesia.

It was the first workshop on the study, which aims at identifying the measures to establish a transparent, liquid, and stable LNG market in Asia; exploring the areas where ‘new’ natural gas demand is expected; and discussing how to activate upstream investments as well as enhance cost competitiveness of LNG supply.

In order to achieve those targets, the workshop gathered an international group of governmental and industrial experts, think tank leaders, and senior researchers from international institutes. Prof Hidetoshi Nishimura, President of ERIA, attended the workshop and delivered his remarks alongside other presenters such as Mr Masato Sasaki, Director of Oil and Gas Division, Agency for Natural Gas Resources & Energy, Ministry of Economy, Trade, and Industry; Mr Masakazu Toyoda, CEO of the Institute of Energy Economics, Japan; Mr Sun Xiansheng, Secretary General of the International Energy Forum; and Mr Lucian Pugliaresi, President of the Energy Policy Research Foundation, Inc.

The workshop participants discussed the latest developments in the dynamics of the LNG sector in recent years, as well as exchanged insights and opinions on the above-mentioned issues. There were several key issues that were discussed in detail, such as the significant expansion of demand in East Asia, emerging markets for LNG, uncertainties of future demand and future supply regionally as well as globally, an increase in export capacity from the U.S., financing issues with new LNG projects, as well as pricing mechanism and cost competitiveness of LNG.

In the past, ERIA has conducted studies on natural gas, including LNG supply chain, infrastructure, potential demand, market, and pricing. ERIA strives to continuously contribute valuable intelligence and knowledge to East Asia’s Energy Ministers through the East Asia Summit mechanism. Based on its extensive research on natural gas, ERIA included a statement about natural gas in the Bohol Reflection, jointly announced by Secretary Alfonso G. Cusi, Department of Energy of the Philippines; Pehin Dato Mohammad Yasmin Umar, Minister of Energy and Industry at the Prime Minister’s Office, Brunei Darussalam; and Prof Hidetoshi Nishimura following the first East Asia Energy Forum.

This year, the project will continue with one workshop in Bangkok in August and another one in Washington, D.C. in September. Both workshops will be held in cooperation with the Institute of Energy Economics, Japan (IEEJ) and Energy Policy Research Foundation, Inc. (EPRINC). The full report of the project is scheduled to be published around June-July 2019 and can be accessed for free on ERIA’s website.