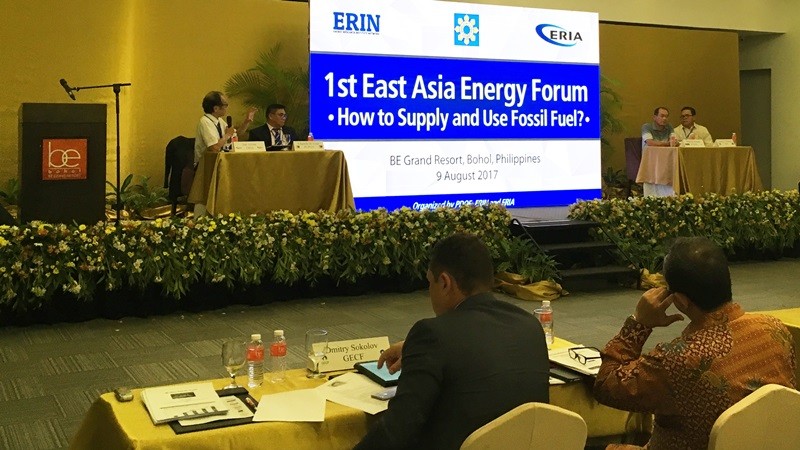 The Economic Research Institute for ASEAN and East Asia (ERIA) and its Energy Research Institutes Network (ERIN) worked together with the Philippines Department of Energy to organise the inaugural East Asia Energy Forum in Bohol, the Philippines, on 9 August 2017. More than 15 high-level experts and policymakers delivered presentations at the forum, which was attended by more than 75 participants.

H.E. Alfonso G. Cusi, the Energy Secretary of the Philippines, and Prof Hidetoshi Nishimura, the President of ERIA, delivered the welcome remarks. In his remarks, Secretary Cusi stated that the Forum was the first of its kind and it was a historic occasion. He also expressed his hope that the Forum could be institutionalised as a regular event in regional energy cooperation for ASEAN and East Asia. He went on to discuss the importance of energy in development.

'Energy is obviously a key component in economic development: the latter simply cannot happen without the former. It is hence, timely and relevant to deepen our critical awareness and share expertise in this area,' said Secretary Cusi.

According to Secretary Cusi, conventional energy provides the reliability, security, and diversification that countries needed to encourage economic growth, until we can reach a carbon-free energy future. He also took into account the fact that every country has different economies, geographies, and social needs, which translates into different approaches to reach an ideal energy mix.

'As such, I believe it is important to take a "technology-neutral" approach when devising our energy policies,' he said, explaining that 'broadly speaking, "technology-neutral" means that we shouldn't be constrained by rigid or arbitrary targets in sourcing our energy. In other words, both conventional and non-conventional sources must be considered. However, this shouldn't be equated with abandoning climate action.'

Prof Nishimura echoed Secretary Cusi's statement regarding the importance of energy saving, clean energy, and the significant increase of low carbon energy in the future, as well as the fact that it may take some time to achieve an affordable and stable use of renewable energy.

'ERIA also understand that fossil fuels, not only gas but also coal and oil, are indispensable at least in the next decade. Consequently, ERIA chose fossil fuel as the theme of the 1st East Asia Energy Forum (EAEF) and the forum discusses about major issues of each fossil fuel, such as coal, oil and gas,' said Prof Nishimura.

'ERIA's initiative in the [email protected] project, in collaboration with the Philippines government as ASEAN Chair, is further testimony to the increasingly important role ERIA plays in the region. This shows that ASEAN needs ERIA, not only in its work as a leading research institute, but also in ensuring that the work is translated into impact on the ground. This endeavour is clearly reflected in the organising of this inaugural East Asia Energy Forum, co-organised by ERIA and ERIN with the Philippines Department of Energy,' said Minister Umar.

'Over the next 23 years or so, the demand pivot for LNG will shift towards Asia and the region will see an increase of imports from regions outside Asia. In fact, the Asia Pacific region is expected to see an increase of 34 percent in LNG production capacity in 2022. Asia is also expected to import LNG at about 44 bcf per day in 2035, approximately accounting for 70 percent of the global LNG import. With this in mind, I call on my fellow Asian friends and colleagues to work together and position ourselves to take full advantage of this,' he said.

Minister Umar stated that he would like to see the gas market to be more liberalised through 'a shared and third party operated infrastructure', which would allow gas prices to be more market-driven and competitive. He added that gas would also be important in addressing climate change as it is a cleaner form of energy.

Prof Jun Arima, ERIA's Senior Policy Fellow for Energy and Environment, opened the session on coal with a keynote speech and then acted as the moderator for the subsequent panel discussion. Afterwards, ERIA's Special Advisor to President on Energy Affairs, Mr Shigeru Kimura delivered a presentation on EAS Energy Outlook, followed by the other two sessions that were moderated by Dr Ucok W.R. Siagian (Centre for Research on Energy Policy, Bandung Institute of Technology, Indonesia) and Mr Dmitry Sokolov (Head of Energy Economics & Forecasting Department, Gas Exporting Countries Forum).

The sessions highlighted experiences and insights into how to supply and use fossil fuel from the Philippines, Brunei, Indonesia, Japan, and the United States, among others. Delegates also noted best practices for community engagement in the development of fossil fuel projects, which include identifying and regularly engaging stakeholders with strong interests in the project and being responsive to local community concerns.

Ultimately, forum discussions noted the critical role of governments in strengthening the policy environment that can enable the cleaner use of fossil fuels. This includes through crafting appropriate incentives (both fiscal and non-fiscal) and fostering healthy environments for investment and innovation that can support the twin goals of affordability and sustainability.

Key Points from the Conference