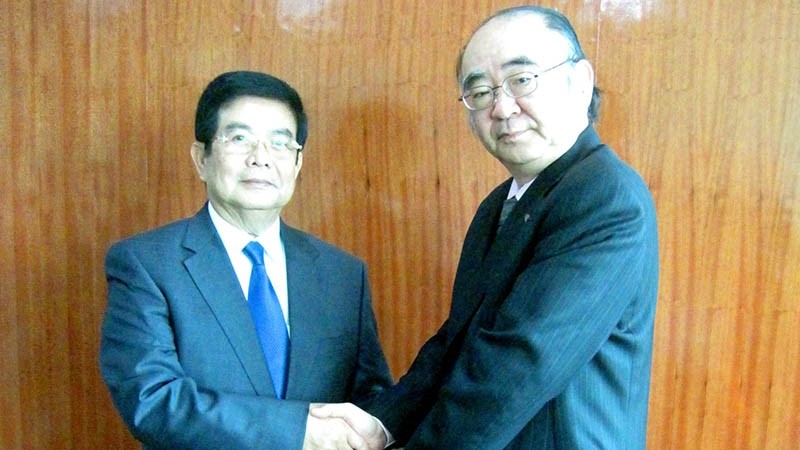 On 16 June 2014, Prof Hidetoshi Nishimura, Executive Director of ERIA, made a courtesy visit to H.E. Mr Suy Sem, Minister of Mines and Energy of the Kingdom of Cambodia in Phnom Penh, Cambodia.

The visit was marking the successful support of ERIA's Energy Unit in the preparation of the study 'Petroleum Consumption Survey 2013' in the past year and on the occasion of the recent establishment of the Cambodian Ministry of Mines and Energy after the 2013 Cambodian national election.

Prof Nishimura expressed his appreciation to the Cambodian government for its numerous cooperation with ERIA, especially on energy related issues taken up during Cambodia's Chairmanship of the ASEAN/EAS Energy Ministers Meeting in 2012. He further noted that the EAS Leaders have acknowledged the concrete contributions of the studies supported by ERIA under the Energy Work Stream which included, among others, Energy Efficiency and Conservation, Biofuels for Transport and Other Purposes, and Energy Market Integration.

In response, H.E. Mr Suy Sem also expressed appreciation for ERIA's full support to and cooperation with the newly established Cambodian Ministry of Mines and Energy as well as its technical support in the preparation of the abovementioned petroleum consumption survey. In addition, he also extended his thanks to ERIA for having many staff members of the Ministry participate in capacity building seminars organised by ERIA, notably that on the 'Energy Outlook.'