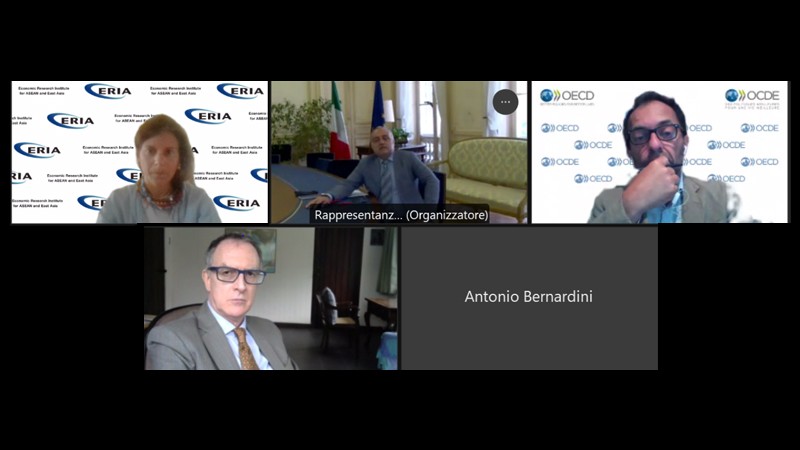 Paris/Jakarta 13 July 2021: The latest OECD Economic Survey of Indonesia notes how economic growth in the county has been severely affected by the pandemic (even before the current deadly wave), which makes the macroeconomic situation in the country very uncertain. According to the OECD study, to unblock and maximise the potential for a vigorous economic recovery, Indonesia needs to remove restrictions to foreign direct investments (FDI), and to trade and services, while at the same time protecting its biodiversity. The study also notes the dynamism of the Indonesian start-up ecosystems in sectors that are not heavily regulated, which hints at the fact that a similar dynamism could be achieved in other sectors if current restrictions were to be eased.

The Permanent Delegation of Italy to the OECD together with the Embassy of Italy to Indonesia and ASEAN and the OECD Secretariat hosted an event to discuss recent findings of the OECD Economic Survey of Indonesia. ERIA Director for Strategy and Partnership, Dr Giulia Ajmone Marsan, participated in the event to share views on the Indonesian economy and the latest developments related to the COVID-19 pandemic.

The online event was the first of a series on G20 economies during the year of the Italian Presidency of the G20. Indonesia will become G20 President in 2022 following Italy. The event was opened by a video message by Ambassador Antonio Bernardini, Italian Ambassador to the OECD and other International Organisations based in Paris. Mr Andrea Goldstein, Senior Economist of the OECD, presented the latest OECD Survey of Indonesia. He discussed current macro-economic trends and existing obstacle and restrictions towards foreign investments into Indonesia, a country where foreign direct investments are considerably more regulated and restricted than in OECD countries and other emerging economies.

Dr Ajmone Marsan commented on the recent pandemic wave affecting Indonesia, the most acute in the country so far. Given the epidemiological situation in the country, the Indonesian government has implemented some of the tightest measures since the beginning of the pandemic (closure of non-essential shops, quasi mandatory working from home and limitations to travel for unvaccinated individuals). While it is too early to estimate the economic impacts of these measures, if in place for a longer period of time, they will have serious repercussions on the expected economic growth during 2021. She also described the recent dynamism of the Indonesian digital economy, witnessed by the presence of five domestic unicorns (a start-up whose value is estimated at at least 1B USD before going public), which is almost half of the unicorns of the entire ASEAN region. She also mentioned how the limited availability of high skills in the country represents a bottleneck to economic growth and innovation. Increasing the quality of the national education system and attracting talent from abroad could contribute to ease this bottleneck in the future.

The event was concluded by Ambassador Bendetto Latteri, who thanked participants and described the important role of Indonesia within ASEAN and across the region. He encouraged Italian businesses and stakeholders to look at the country as a destination for investments and business relations.